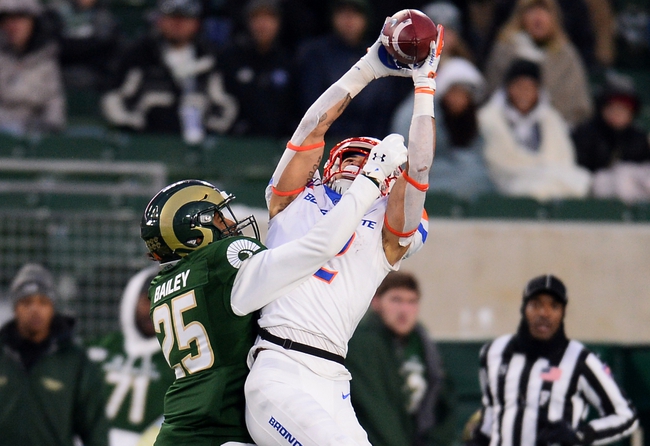 The Hawaii Warriors and the Boise State Broncos meet in the Mountain West conference championship game in college football action from Albertsons Stadium on Saturday afternoon.

The Hawaii Warriors enter this one with a record of 9-4, including a 5-3 mark in Mountain West conference play to finish at the top of the West division winning out on a head-to-head tiebreaker with San Diego State after defeating the Aztecs 14-11 just a couple of weeks ago. Cole McDonald threw for 3,401 yards, 29 touchdowns and 13 picks on 64.8% passing while Miles Reed led the Warriors with 804 rushing yards and 7 touchdowns. Cedric Byrd II led the Warriors with 91 catches for 1,049 receiving yards and 10 touchdowns while Jared Smart had 76 grabs for 915 yards and JoJo Ward chipped in 55 catches for 906 yards and a team-high 11 touchdowns. Jason-Matthew Sharsh added 73 catches for 749 yards for Hawaii this season. Defensively, Solomon Matautia led the Warriors with 68 total tackles while Khoury Bethley added 66 total tackles with a team-high 47 solo tackles. Kaimana Padello led the Warriors with 3 sacks while Ikem Okeke had 3 interceptions this season. As a team, Hawaii is averaging 35.4 points per game and 481.1 yards of total offense while allowing 31.8 points per game against and 431.2 yards of total defense per game this season.

The Boise State Broncos will hope to lift the trophy for the 2nd time in three years, making their third straight Mountain West title game appearance and 4th ever after an 11-1 season in which the Broncos finished with an 8-0 record in Mountain West conference play. Hank Bachmeier threw for 1,760 yards, 9 touchdowns and 4 picks, but is nursing a shoulder injury so that could leave QB duties to Jaylon Henderson who has thrown for 820 yards, 9 touchdowns and an interception on 61.5% passing this season. George Holani leads Boise State in rushing with 912 rushing yards and 7 touchdowns while Robert Mahone had 413 rushing yards and 6 TDs. John Hightower leads Boise state with 859 receiving yards and 7 touchdowns while Khalil Shakir has a team-high 53 catches for 745 yards and 6 touchdowns. Defensively, Riley Whimpey leads Boise State with 62 total tackles while Curtis Weaver had a team-high 13.5 sacks this season. As a team, Boise State is averaging 37.3 points per game and 448 yards of total offense while allowing 21.5 points per game against and 349.8 yards of total defense this season.

This feels like a lot of points to give to a Hawaii team that’s capable of hanging around offensively, especially when the Broncos weren’t that dominant ATS this season. However, Boise State hung 59 on Hawaii when the two met earlier this season, and while the teams change over the years, one thing that hasn’t changed is that Boise State has dominated Hawaii. The Broncos have won 7 in a row against Hawaii by at least 20 points in each of those games, and the four games since the two joined the Mountain West have seen the Broncos win by an average of 37 points per game. I’m not saying a 37-point win happens in the conference championship game, but sometimes a team just has your number. I’ll lay the points with Boise State here as I can see the Broncos winning this one in the ball park of 38-24.