The Louisiana Ragin’ Cajuns and the Appalachian State Mountaineers meet on Saturday in the Sun Belt conference championship game from Kidd-Brewer Stadium on Saturday afternoon.

The Louisiana Ragin’ Cajuns come into the conference title game representing the Sun Belt West division with a record of 10-2 including a 7-1 mark in conference play with their lone conference loss coming to these same Appalachian State Mountaineers. Levi Lewis threw for 2,450 yards, 20 touchdowns and 3 interceptions on 65.4% passing in the regular season while Elijah Mitchell led the Cajuns with 1,007 rushing yards and 14 touchdowns. Raymond Calais added 818 rushing yards and 6 TDs while Trey Ragas rushed for 777 rushing yards and 11 touchdowns. Ja’Marcus Bradley led Louisiana in receiving with 48 catches for 760 yards and 7 scores while Jamal Bell added 416 receiving yards and Jarrod Jackson chipped in 320 receiving yards. Jacques Boudreaux led Louisiana with 78 total tackles while Kris Moncrief led the Cajuns with 4 sacks this season. As a team, Louisiana is averaging 500.4 yards of total offense and 38.8 points per game while allowing 369.8 yards of total defense and 17.8 points per game against this season.

The Appalachian State Mountaineers come into this one with a record of 11-1, including a 7-1 mark in conference play, repping the Sun Belt East division with the lone loss coming to Georgia Southern. Zac Thomas threw for 2,427 yards, 24 touchdowns and 6 interceptions on 63.8% passing while Darrynton Evans led App state in rushing with 1,250 yards and 16 touchdowns on the ground. Marcus Williams Jr. added 520 rushing yards with 4 touchdowns as well. Thomas Hennigan led App State in receiving with 54 catches for 673 yards and Malik Williams had 560 receiving yards this season. Defensively, Jordan Fehr led the Mountaineers with 88 total tackles while Shaun Jolly had 5 interceptions to lead App State and Akeem Davis-Gaither chipped in 82 total tackles with 4.5 sacks. Demetrius Taylor added a team-high 6 sacks while Nick Hampton added 4.5 sacks as well this season. As a team, Appalachian State is averaging 437.1 yards of total offense and 38.9 points per game while allowing 321.2 yards of total defense and 18.8 points per game against this season.

I get App State being favored here as they have already beat the Cajuns on the road and now get a home game to lock up the conference championship. However, Louisiana showed that they’re no slouch, especially on the road, going 5-0 SU and 4-1 ATS. The lone team above .500 not named Louisiana that the Mountaineers faced was also their lone loss in conference play to Georgia Southern, the same Georgia Southern team that Louisiana beat by 13. I just think that Louisiana will be better prepared to execute their offense than what we saw in the first meeting and this is a game I see coming down to the final possession, so I’ll take Louisiana and the points in this one. 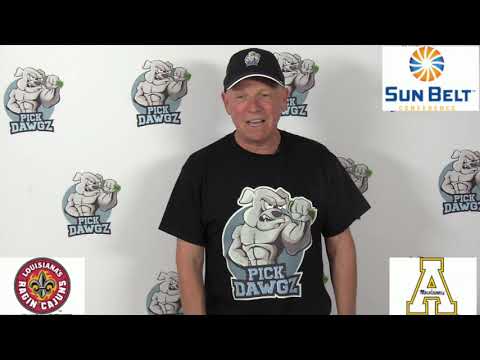