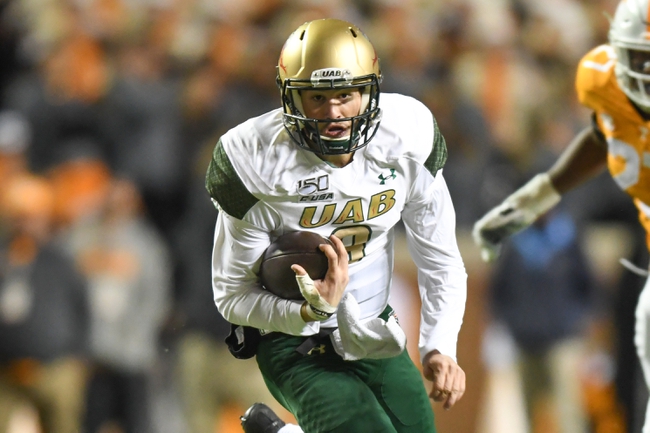 Where to Watch: STADIUM Stream live sports and exclusive originals on ESPN+. Sign up now!

The UAB Blazers and the North Texas Mean Green meet in a week 14 C-USA college football matchup from Apogee Stadium on Saturday afternoon.

The UAB Blazers will look to build on back-to-back wins after a 20-14 win over Louisiana Tech last time out. Dylan Hopkins threw for 185 yards, a touchdown and an interception on 11 of 21 passing while Lucious Stanley led the Blazers in rushing with 61 rushing yards and a touchdown. Jermaine Brown Jr. also had 49 rushing yards while Myron Mitchell had 4 receptions for 81 yards to lead the Blazers in receiving. Austin Watkins had 3 catches for 75 yards and Gerrit Prince added a 14-yard touchdown grab. Defensively, Kristopher Moll led the Blazers with 9 solo tackles and a sack. As a team, UAB is averaging 368.6 yards of total offense and 25 points per game while allowing 269.4 yards of total defense and 18.3 points per game agaisntt his season.

The North Texas Mean Green will look to finish the year on a high note after dropping back-to-back games with a 20-14 loss to Rice in their last outing. Mason Fine threw for 163 yards and an interception on 17 of 32 passing while also rushing for a touchdown while DeAndre Torrey led the Mean Green with 41 rushing yards and Tre Siggers had 41 rushing yards and a touchdown. White led the Mean Green with 3 receptions for 42 yards while Michael Lawrence had 3 grabs for 38 yards. Defensively, Tyreke Davis led the Mean Green with 12 total tackles while Evan Johnson and KD Davis each had a fumble recovery. As a team, North Texas is averaging 430.4 yards of total offense and 31.5 points per game while allowing 421.1 yards of total defense and 33.1 points per game against this season.

The only case for North Texas you can make is that the Mean Green are 4-1 at home this season. However, that’s about where it ends. North Texas is just 3-8 ATS this season and UAB has not only had all of the recent success against North Texas, but UAB needs a win here if they want to have any hope of emerging from the three-way tie to represent the C-USA West in the conference championship game. I just think that UAB has too much on the line here and with this game almost being a pick ‘em, I think you have to side with the Blazers here.