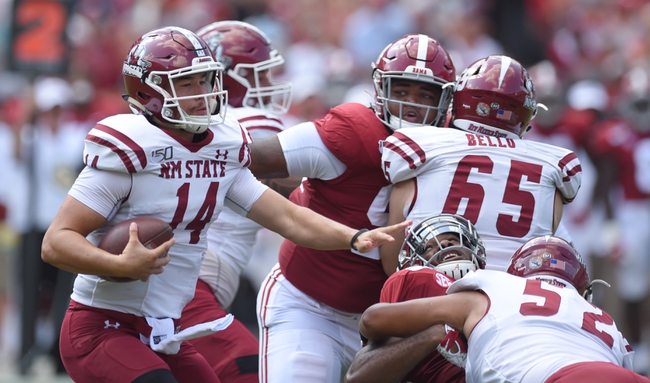 The New Mexico State Aggies will look to finish strong and build on back-to-back wins after a 44-35 win over UTEP. Josh Adkins threw for 175 yards on 18 of 30 passing while Tony Nicholson threw a 7-yard TD pass with his lone attempt Jason Huntley led the Aggies in rushing with 191 rushing yards on 14 carries with 3 touchdowns while Christian Gibson also had a rushing score and 61 rushing yards. DJ Clark led New Mexico State in receiving with 9 catches for 72 yards in the victory. Defensivley, Jared Phipps had a team-high 14 total tackles including 10 solo tackles while Brennon Davis and Javahn Ferguson each had 11 total tackles and Matthew Young had 10 total tackles with a fumble recovery. Rashie Hodge Jr. also added an interception for the Aggies in the win. As a team, New Mexico State is averaging 364.3 yards of total offense and 21.1 points per game while allowing 479.6 yards of total defense per game and 40.3 points per game against this season.

The Liberty Flames will look to rebound from back-to-back losses after a 55-27 loss to Virginia in their last outing. Stephen Calvert had 283 passing yards, 2 touchdowns and 2 interceptions on 16 of 40 passing while Frankie Hickson added 88 rushing yards and a touchdown on 15 carries. CJ Yarbrough led the Flames with 83 receiving yards while Antonio Gandy-Golden had a team-high 6 catches for 60 yards and a touchdown. Peytton Pickett added 56 receiving yards while Noah Frith also chipped in a pair of catches and a touchdown with 43 receiving yards. Defensively, Solomon Ajayi had 13 total tackles while Elijah Benton added 11 total tackles with a team-high 7 solo tackles. As a team, Liberty is averaging 439.4 yards of total offense and 32.3 points per game while allowing 431.4 yards of total defense and 29.2 points per game against this season.

The points with the Aggies are tempting, but the fact is that both of their wins have come at home and New Mexico State hasn’t been as good on the road, losing 5 of their 6 road games by double-digits. Liberty has had most of their success this season at home and could use a feel good win with bowl season around the corner. I’ll lay the points with the Flames in this one.