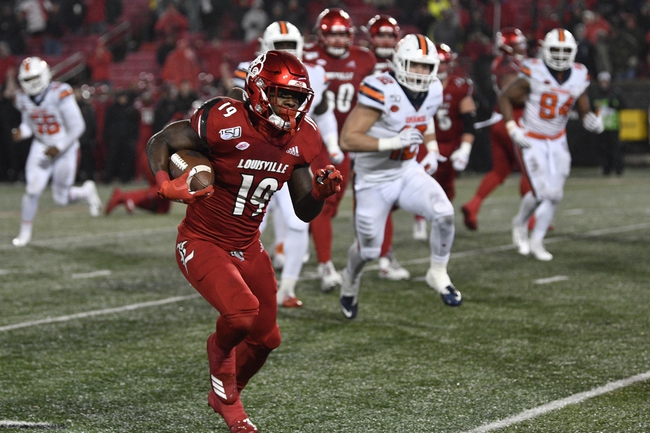 The Louisville Cardinals and the Kentucky Wildcats meet in the 32nd installment of the Governor’s cup in a week 14 college football matchup from Kroger Field on Saturday.

The Louisville Cardinals come into this game looking to finish strong and build on back-to-back wins after a 56-34 win over Syracuse. Micale Cunningham threw for 238 yards, 5 touchdowns and an interception on 11 of 20 passing while also rushing for 60 yards and a touchdown. Javian Hawkins led Louisville in rushing with 233 rushing yards and a touchdown on 23 carries while Hassan Hall had 71 rushing yards and a touchdown. Tutu Atwell led the Cardinals with 5 catches for 152 yards and 2 touchdowns while Seth Dawkins, Jordan Davis and Marshon Ford each had a receiving TD. Defensively, Dorian Etheridge and Rodjay Burns led the Cardinals with 12 total tackles apiece, while Yasir Abdullah added a fumble recovery and Amonte Caban had a sack in the victory. As a team, Louisville is averaging 454.2 yards of total offense and 34.5 points per game while allowing 439.5 yards of total defense and 32.8 points per game against this season.

The Kentucky Wildcats will look to finish strong with back-to-back wins of their own with a 50-7 win over Tennessee-Martin last time out. Lynn Bowden Jr. led the Wildcats with 129 rushing yards and 2 touchdowns while Asim Rose had 106 rushing yards and a touchdown. Travis Tisdale, Tyler Markray and Christopher Rodriguez Jr. each had a rushing score as well in the winning effort for Kentucky. Defensively, Jamin Davis led the Wildcats with 6 total tackles and an interception while Calvin Taylor Jr. and Joshua Paschal each had 1.5 sacks and Yusuf Corker had a fumble recovery. As a team, Kentucky is averaging 380.4 yards of total offense and 24.6 points per game while allowing 328.5 yards of total defense and 18.9 points per game against this season.

I get Kentucky being favored at home in a rivalry game, but the problem is that home field hasn’t meant much against the number as the road team has covered 10 of the last 11 meetings and Louisville has covered in each of their last 5 trips to Kroger Field. I like how Kentucky has looked with their run heavy offense, but I just think that Louisville has the balance to cancel it out and get the job done on the road so I’ll take Louisville and the points here.