The Florida State Seminoles and the Florida Gators meet in a week 14 college football matchup from Ben Hill Griffin Stadium on Saturday night in the Sunshine Showdown.

The Florida State Seminoles will look to finish the year above .500 after picking up a 49-12 win over Alabama State last time out. James Blackman threw for 246 yards, 3 touchdowns and a pick on 13 of 22 passing while Jordan Travis had 69 rushing yards and Khalan Laborn had 55 rushing yards and a pair of touchdowns. Deonte Sheffield added a rushing TD as well while Tre’Shaun Harrison had 94 receiving yards and a touchdown. Tamorrion Terry had 90 receiving yards on 4 catches with a touchdown while Gabe Nabers had 58 receiving yards and D.J. Matthews had a receiving TD as well. Defensively, Stanford Samuels III and Hamsah Nasirildeen each had an interception, with the latter recording an 80-yard pick-six. Nasirildeen also had a team-high 11 total tackles including 7 solo tackles. As a team, Florida State is averaging 417.1 yards of total offense and 30.2 points per game while allowing 433.2 yards of total defense and 27.5 points per game against this season.

The Florida Gators will look to build on a 23-6 win over the Missouri Tigers in their last outing. Kyle Trask threw for 282 yards and 2 touchdowns on 23 of 35 passing while Emory Jones led the Gators on the ground with 39 rushing yards as well as throwing a 48-yard pass on his only attempt. Van Jefferson led the Gators in receiving with 6 catches for 82 yards while Trevon Grimes had 66 receiving yards and Josh Hammond and Lamical Perine each had a receiving TD for Florida in the win. Defensively, Jonathan Greenard led the Gators with 6 total tackles and a pair of sacks while Ventrell Miller added 6 tackles and Marco Wilson contributed an interception as well in the win. As a team, Florida is averaging 416.7 yards of total offense and 32.4 points per game while allowing 306.3 yards of total defense and 14.2 points per game against this season.

The points are tempting with FSU as the Seminoles have covered their last 4 trips to Ben Hill Griffin Stadium and the road team’s had most of the recent success between the two sides. However, Florida’s been arguably the most improved team in the SEC from last season, and the Gators have done it defensively by shutting down four of six opponents who have come to their neck of the woods, holding Towson, Tennessee, Vanderbilt and UT-Martin to 3 points or less while also giving up just 13 to Auburn and hanging with Georgia. Florida State’s been average at best and while this is an in-state rivalry game, I just think this is a year when it’s not that close. Give me Florida and lay the points here. 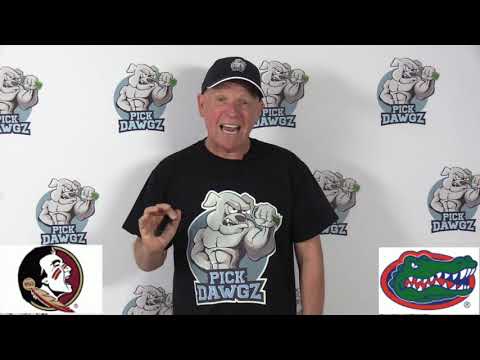