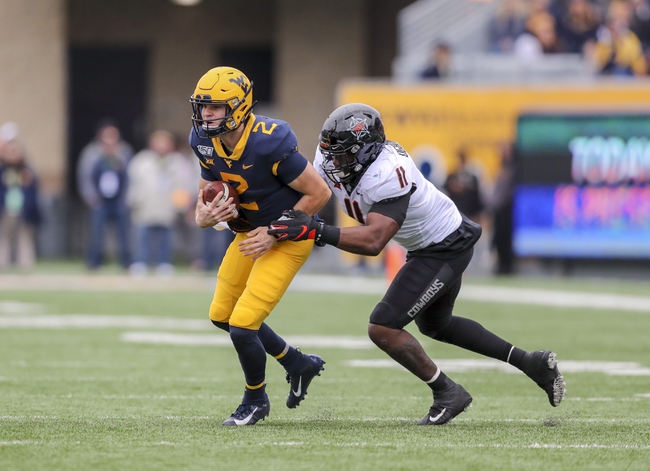 The West Virginia Mountaineers and the TCU Horned Frogs meet in a week 14 Big 12 conference college football tilt from Amon G. Carter Stadium on Friday as they close out the CFB regular season.

The West Virginia Mountaineers come into this game looking to finish the year on a high note after a 20-13 loss to Oklahoma State in their last outing. Jarret Doege threw for 307 yards and a touchdown on 28 of 38 passing while Leddie Brown led the Mountaineers in rushing with 31 rushing yards. George Campbell led the Mountaineers in receiving with 5 catches for 92 yards and a touchdown while Ali Jennings had 50 receiving yards and Sam James added 7 receptions. Defensively, Josh Chandler and Kerry Martin Jr. tied for the team-high with 9 total tackles, with Chandler posting a team-high 7 solo tackles. Jeffery Pooler Jr., Shea Campbell and Dante Stills each had a sack as well in the win. As a team, West Virginia is averaging 329.2 yards of total offense and 20.6 points per game while allowing 409.9 yards of total defense and 29.9 points per game against this season.

The TCU Horned Frogs will look to finish back where they started at .500 and try to gain bowl eligibility after narrowly falling to 5-6 with a 28-24 loss to Oklahoma last time out. Max Duggan led TCU with 65 passing yards and a pick on 7 of 21 passing but rushed for a team-high 92 yards and a touchdown. Sewo Olonilua added a rushing TD of his own while Te’Valiance Hunt had 3 grabs for 34 receiving yards. Defensively, Vernon Scott had a 98 yard pick-six while Garret Wallow had 16 total tackles and a sack. As a team, TCU is averaging 417.7 yards of total offense and 31.5 points per game while allowing 347 yards of total defense and 27 points per game against this season.

The points are worth a look considering how much success West Virginia has had in the past as well as the fact that this is all the Mountaineers have left to play for, so they can put their best foot forward. However, TCU needs this game badly to clinch bowl eligibility, and I’m not sure how confident I am in backing West Virginia on the road, especially when TCU has a tendency of beating up on teams below them. I’ll lay the points with TCU in a game I see the Horned Frogs winning by a couple of scores.