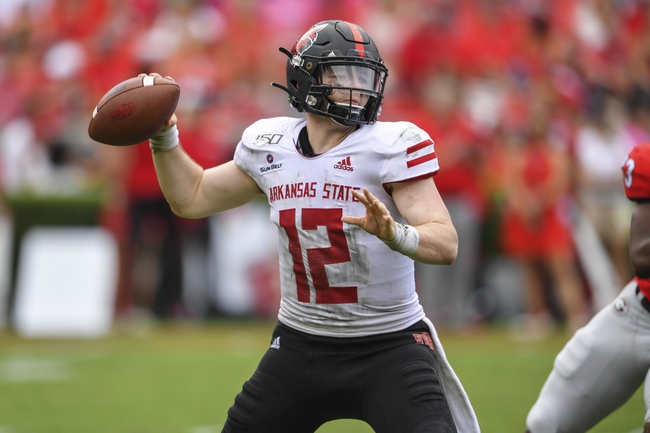 The Arkansas State Red Wolves and the South Alabama Jaguars meet in week 14 Sun Belt college football action from Ladd-Peebles Stadium on Friday as they close out the CFB regular season.

The Arkansas State Red Wolves come into this game looking to finish on a high note, sitting on a four game winning streak after a 38-33 win over Georgia Southern last time out. Layne Hatcher threw for 354 yards and 4 touchdowns on 19 of 24 passing while Jamal Jones led A-State with 74 rushing yards and Marcel Murray had 37 rushing yards. Jonathan Adams Jr. had 7 receptions for a team-high 158 yards and 2 TDs while Omar Bayless had 7 grabs for 113 yards and a TD and Kirk Merritt had a receiving TD as well. Merritt also logged a kick return touchdown while Darreon Jackson led the A-State defense with 11 total tackles. Kevin Thurmon had a pair of sacks while William Bradley-King had 1.5 sacks. As a team, Arkansas State is averaging 431.7 yards of total offense and 34 points per game while allowing 480.1 yards of total defense and 34.9 points per game against this season.

The South Alabama Jaguars will look to finish on a winning note and snap a nine game losing streak after falling to 1-10 with a 28-15 loss to Georgia State last time out. Desmond Trotter threw for 218 yards, 2 touchdowns and an interception on 12 of 25 passing while Tra Minter led the Jags with 70 rushing yards. Jalen Tolbert led the Jaguars with 74 receiving yards and a touchdown while Kawaan Baker and Brandon Crum each had a team-high 3 receptions and Jalen Wayne added a receiving score. Defensively, Nick Mobley led USA with 7 total tackles while Devin Rockette added an interception as well. As a team, South Alabama is averaging 315.3 yards of total offense and 17 points per game while allowing 406.4 yards of total defense and 30.7 points per game against this season.

South Alabama has actually kept the scores somewhat reasonable as of late, but even still, I just don’t see South Alabama finishing on a high note here. Arkansas State is just the team in much better form and I think the Red Wolves make a statement in this game so I’ll lay the points with Arkansas State here.