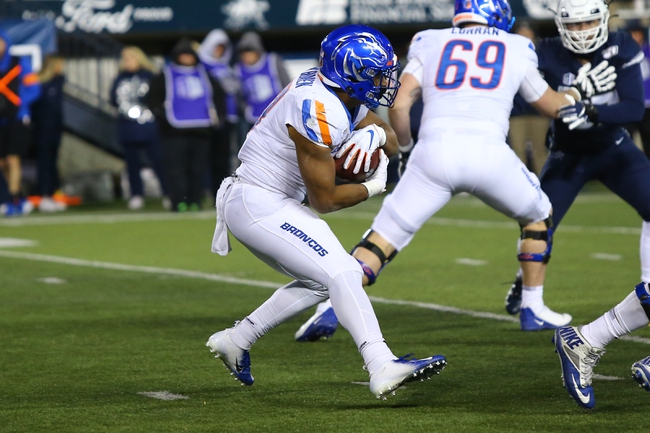 The Boise State Broncos and the Colorado State Rams meet in a week 14 Mountain West conference college football matchup from Canvas Stadium on Friday as they close out the CFB regular season.

The Boise State Broncos will look to add to their current four game winning streak after a 56-21 win over Utah State last time out. Jaylon Henderson threw for 187 yards and 3 touchdowns on 16 of 28 passing while George Holani rushed for 178 yards and a pair of touchdowns and Robert Mahone added a rushing TD as well. John Hightower led Boise State with 56 receiving yards and an interception while CT Thomas had a team-high 5 receptions for 36 yards and a touchdown and Khalil Shakir had 27 yards and a TD of his own. Avery Williams also added a punt return touchdown while defensively, Demitri Washington led the Broncos with 6 total tackles including 4 solo tackles and a sack. As a team, Boise State is averaging 457.5 yards of total offense and 37.9 points per game while allowing 347.1 yards of total defense and 21.3 points per game against this season.

The Colorado State Rams will look to finish the year on a high note after a 17-7 win over Wyoming in their last outing. Patrick O’Brien led the Rams by throwing for 217 yards, a touchdown and an interception on 17 of 29 passing while Jaylon Thomas had 23 rushing yards to lead Colorado State. Warren Jackson led the Rams with 6 catches for 95 yards and a touchdown while Trey McBride also had 6 receptions for 78 yards. Defensively, Emmanuel Jones led Colorado State with 9 total tackles, including 8 solo tackles and a team-high 3 sacks. As a team, Colorado State is averaging 442.7 yards of total offense and 28.5 points per game while allowing 380.6 yards of total defense and 31.2 points per game against this season.

I think Colorado State will be up for this game especially at home, but the Rams have been shotty defensively at times this season, and Boise State is still trying to lock up a spot in the Mountain West championship game. I think this is a game that Boise State handles from start to finish, so I’ll lay the points with Boise State here.