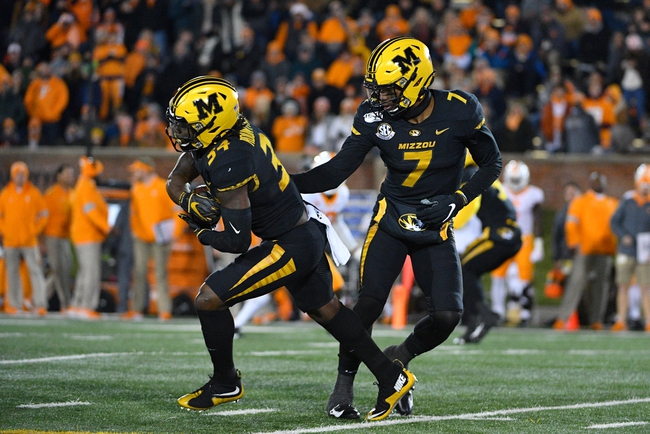 The Missouri Tigers and the Arkansas Razorbacks meet in a week 14 SEC conference college football matchup from War Memorial Stadium on Friday. as they close out the CFB regular season

The Missouri Tigers will look to finish the season back at .500 and clinch bowl eligibility after falling to 5-6 with a 24-20 loss to Tennessee in their last outing, their 5th straight loss. Kelly Bryant threw for 166 yards and a touchdown on 16 of 28 passing while Micah Wilson threw a 16-yard touchdown pass on his lone attempt through the air. Larry Rountree III led the Tigers with 43 rushing yards while Tyler Badie had 35 rushing yards. Barrett Banister led the Tigers with 5 catches for 46 yards while Jalen Knox had 33 receiving yards and the aforementioned Badie had a pair of TD grabs for Missouri. Defensively, Nick Bolton led Mizzou with 10 total tackles including 6 solo tackles while Kobie Whiteside added a fumble recovery for the Tigers. As a team, Missouri is averaging 378.4 yards of total offense and 25.5 points per game while allowing 318.4 yards of total defense and 19.9 points per game against this season.

The Arkansas Razorbacks will look to finish the season on a high note and snap an eight-game losing streak after a 56-20 loss to LSU last time out. K.J. Jefferson led the Hogs with 105 passing yards on 7 of 14 passing while Jack Lindsey had 51 passing yards and a passing TD and Nick Starkel went 3 for 10 for 34 yards. Rakeem Boyd led the Razorbacks with 33 rushing yards while Drvwah Whaley had a rushing TD as well. Treylon Burks led Arkansas in receiving with 3 catches for 80 yards while Mike Woods had 3 grabs for 47 yards and a touchdown. Defensively, De’Jon Harris led the way with 8 total tackles including a team-high 5 solo tackles while Kamren Curl had a fumble recovery as well in the losing effort. As a team, Arkansas is averaging 349.1 yards of total offense and 22.1 points per game while allowing 462.3 yards of total defense and 38 points per game against this season.

I get the Tigers being favored with their bowl season hanging in the balance. However, while Arkansas has been the worst team in the SEC this season, I’m not sure how anyone can pass up the points here. It’s Arkansas’ senior day which tends to bring out the best in the underclassmen who want to step up for the guys who are playing their last game. Also, and maybe even more important, Missouri’s 0-4 SU and ATS on the road this season, and that includes being a double-digit favorite twice and a 9.5-point favorite. I just don’t have any faith in the Tigers on the road, and it wouldn’t surprise me to see them slip up here as well. I’ll take a shot at Arkansas and the points here.