The Boise State Broncos and the Utah State Aggies meet in week 13 college football action from Maverik Stadium on Saturday.

Boise State is 9-1 this year overall. Following their loss to BYU, the Broncos have since dispatched San Jose State, Wyoming and New Mexico in succession.

In the win over the Lobos, Boise State QB Jaylon Henderson put up 292 yards with three TDs and a pick, and George Holani had 73 yards rushing. John Hightower led the receivers there with four catches for 124 yards and a TD.

Over on the Utah State side, they’re 6-4 so far. The Aggies are 3-3 over their last six games, with losses to LSU, Air Force and BYU along with wins over Nevada, Fresno State and Wyoming.

In the win over the Cowboys, Utah State QB Jordan Love had 282 yards with two TDs and two picks, and Gerold Bright rushed for 56 yards. Siaosi Mariner was the lead receiver there on 123 yards and a score.

Well, following the pretty shocking loss to BYU, Boise State had a couple of relative nail-biter games there before returning to form against New Mexico 42-9. Outside of a couple hiccups here and there, the Broncos really haven’t had too many difficulties with their schedule this season.

As for Utah State, they’ve had some really great performances this year, and also some equally horrible outings. The good news is that the Aggies have consecutive victories under their belt, despite the fact that they came by a combined seven points.

In any case, if Boise comes out and plays like they’re capable I don’t see this one getting close. I’m going Broncos.

Get Premium Picks Start Winning Now »
The pick in this article is the opinion of the writer, not a PickDawgz site consensus.
Previous Pick
Colorado vs. Washington - 11/23/19 College Football Pick, Odds, and Prediction
Next Pick
Hawaii vs. San Diego State - 11/23/19 College Football Pick, Odds, and Prediction 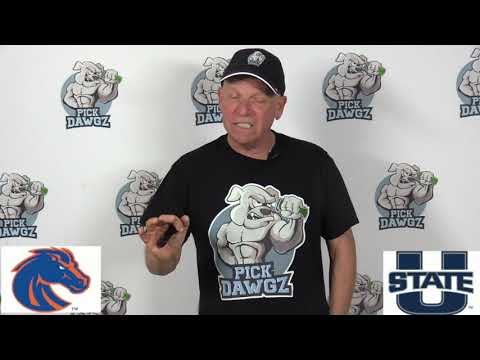