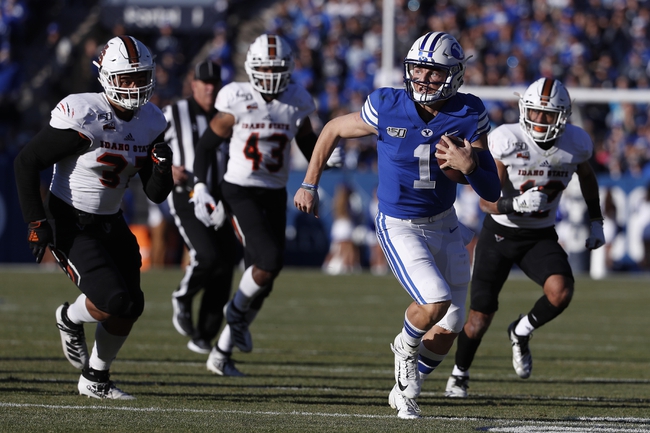 Where to Watch: Flo Football Stream live sports and exclusive originals on ESPN+. Sign up now!

The BYU Cougars and the UMass Minutemen meet in week 13 college football action from McGuirk Alumni Stadium on Saturday afternoon.

The BYU Cougars will look to build on their 6-4 mark this season after picking up a 42-10 win over Idaho State last time out. Zach Wilson has thrown for 1,499 yards, 7 touchdowns and 5 interceptions on 61.7% passing while Sione Finau leads the Cougars in rushing with 369 rushing yards. Ty’Son Williams and Lopini Katoa each have 200+ rushing yards for BYU this season while Matt Bushman leads BYU with 502 receiving yards and 4 touchdowns. Micah Simon has a team-high 39 catches for 494 yards while Aleva Hifo has 32 grabs for 406 yards and Talon Shumway has 30 catches for 364 yards. Gunner Romney and Dax Milne each have 200+ receiving yards for the Cougars this year. Defensively, Kavika Fonua leads BYU with 68 total tackles while Payton Wilgar has a team-high 3 interceptions and Lorenzo Fauatea has 2 sacks on the year. As a team, BYU is averaging 423 yards of total offense and 27.7 points per game while allowing 406 yards of total defense and 25.6 points per game against this season.

The UMass Minutemen will look to finish the year on a high note after falling to 1-10 with a 45-6 loss to Northwestern in their last outing. Andrew Brito has thrown for 815 yards, 7 touchdowns and 6 interceptions on 54.7% passing while Randall West has tossed for 733 yards, 4 touchdowns and 5 picks on 58.2% passing. Bilal Ally leads UMass with 726 rushing yards and 6 touchdowns while Cam Roberson has 350 rushing yards. Zak Simon leads the Minutemen in receiving with 340 receiving yards while Jermaine Johnson Jr. had a team-high 35 catches for 281 yards. Samuel Emilus, Sadiq Palmer and Brennon Dingle all have 200+ receiving yards for the Minutemen this season. Defensively, Cole McCubrey leads UMass with 78 total tackles including a team-high 43 solo tackles while Isaiah Rodgers leads the Minutemen with 4 interceptions. As a team, UMass is averaging 293.2 yards of total offense and 19.4 points per game while allowing 553.5 yards of total defense and 52.4 points per game against this season.

I’d like to say that these lines with the UMass games are getting out of hand, but the fact is that they’re only out of hand if the Minutemen are covering them, which they aren’t. UMass just gave up 45 against a Northwestern team that isn’t good at all and still lost by 39. BYU has been one of the more under the radar teams in the country this season and has potential to light up the scoreboard when they want to. I’ll lay the points with BYU as siding with UMass simply isn’t an option.