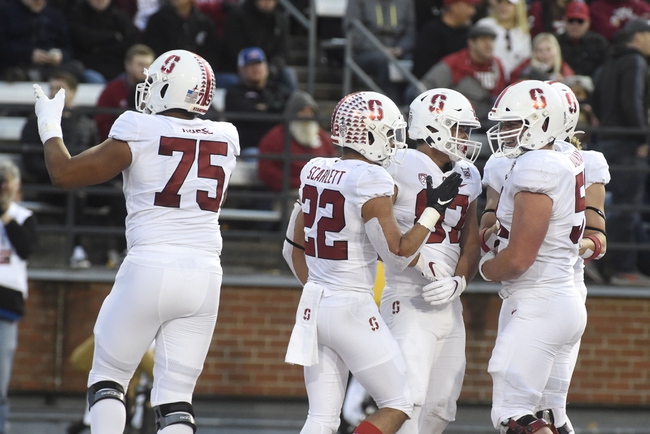 The California Golden Bears and the Stanford Cardinal meet in week 13 college football action from Stanford Stadium on Saturday.

California is sitting at 5-5 so far. In their last six games Cal is just 1-5, beating Washington state and falling to Arizona State, Oregon, Oregon State, Utah and USC otherwise.

In the loss to USC, California QB Devon Modster posted 95 yards with two picks, and Deshawn Collins had 103 yards and two TDs. Jordan Duncan managed 53 yards on five catches there as well.

Over on the Stanford side, they’re 4-6 so far. The Cardinal have lost three of their last four games, beating Arizona while falling to UCLA, Colorado and Washington State otherwise.

In the loss to Washington State, Stanford QB Davis Mills had 504 yards with three scores and two INTs, with Connor Wedington leading the receivers on 119 yards from eight catches. Osiris St. Brown led the Stanford rush there with a single eight-yard run.

Well, Cal has certainly hit the skids lately. None of their last four losing games has been close, with the exception of the four-point Oregon State defeat, but to their credit the Bears did hang 33 on Washington State.

The good news for Cal is that Stanford hasn’t eclipsed 22 points in three of their last four games and they’re looking pretty sketchy as well. I’m hesitantly going to take the Golden Bears on the cover here, but I don’t like the matchup.