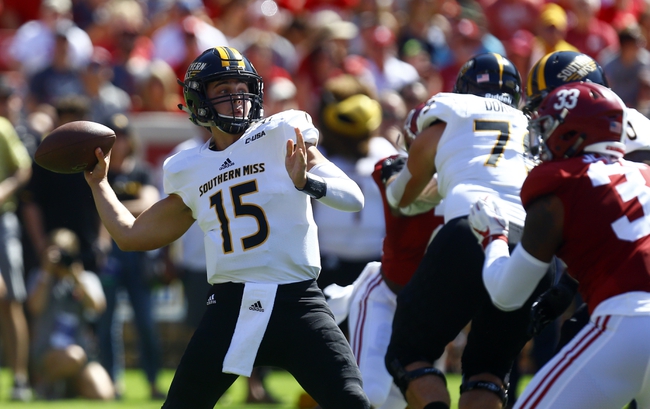 Western Kentucky sits at 6-4 so far. The Hilltoppers are 5-2 in their last seven games with wins over UAB, ODU, Army, Charlotte and Arkansas with losses to Marshall and FL Atlantic.

In the win over Arkansas, Western Kentucky QB Ty Story had 213 yards with a TD, and Gaej Walker had 129 yards and a TD rushing. Tops in receiving there was Jahcour Pearson with 120 yards and a score off 10 grabs.

Over on the Southern Miss side, they’re 7-3 so far. The Eagles are 5-1 in their last six games, falling to LA Tech but taking out UTEP, North Texas, Rice, UAB and UTSA in that span.

In the win over UTSA, Southern Miss QB Jack Abraham logged 290 yards, two touchdowns and an INT. De’Michael Harris had 121 yards and two scores on the ground, and Quez Watkins put up 137 yards and a TD from seven catches there.

The Hilltoppers have a couple of losses in their last three games, but to their credit they posted at least 23 points in both of those and on the whole have been scoring pretty well over their last quartet of games.

That said, Southern Miss has really been solid over their last trio, posting at least 36 in their last pair and allowing 17 or fewer in all three. I like the Golden Eagles to keep it rolling here and manage a cover.