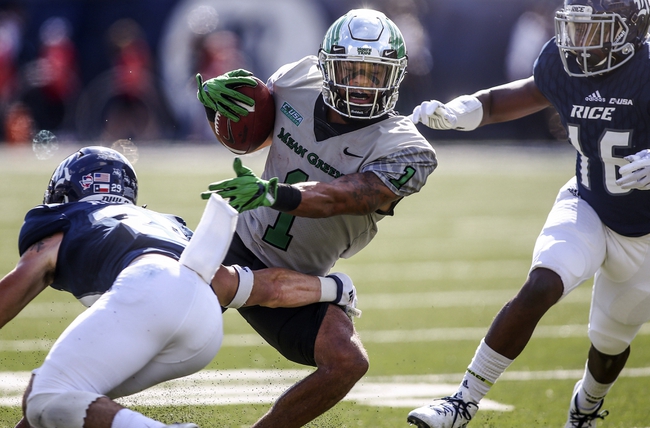 The North Texas Mean Green and the Rice Owls meet in a week 13 C-USA college football matchup from Rice Stadium on Saturday afternoon.

The North Texas Mean Green come into this game looking to finish with some consistency after alternating wins and losses in each of their last 5 games after a 52-17 beatdown on the road at the hands of Louisiana Tech in their last outing. Mason Fine has thrown for 2,657 yards, 27 touchdowns and 6 interceptions on 62.6% passing while Tre Siggers leads the Mean Green in rushing with 792 rushing yards and 5 touchdowns. DeAndre Torrey and Loren Easly each have 200+ rushing yards for North Texas this season. Jaelon Darden leads North Texas with 65 catches for 655 yards and 11 touchdowns while Michael Lawrence has 43 grabs for 579 yards and 3 scores and Jyaire Shorter has 20 catches for 427 yards and 8 touchdowns. Defensively, K.D. Davis leads UNT with 79 total tackles while LaDarius Hamilton leads the Mean Green with 7 sacks on the year. As a team, North Texas is averaging 449.6 yards of total offense and 33.2 points per game while allowing 430.4 yards of total defense and 34.4 points per game against this season.

The Rice Owls will be looking to build on their first win of the season after a 31-28 win over Middle Tennessee State last time out. Tom Stewart has thrown for 760 yards, 7 touchdowns and an interception on 60.9% passing while Aston Walter leads the Owls in rushing with 615 rushing yards and 6 touchdowns. Brad Rozner leads the Owls in receiving with 681 receiving yards and 5 touchdowns while Austin Trammell has a team-high 49 catches for 581 yards and 3 scores. Defensively, Blaze Alldredge leads Rice with 81 total tackles including a team-high 43 solo tackles and 3 sacks. As a team, Rice is averaging 284.5 yards of total offense and 16.5 points per game while allowing 401.4 yards of total defense and 28.1 points per game against this season.

Normally I wouldn’t be trying to lay points with a team that’s 0-5 SU on the road like North Texas is. However, the Mean Green have something to play for, which is more than we can say for Rice right now. The Owls are simply playing for pride and in-state bragging rights, while the Mean Green still have an outside shot at a bowl game if they can win their final two games. North Texas also has a huge advantage at the QB position with Mason Fine under center, so I’ll lay the points with the Mean Green in this one.