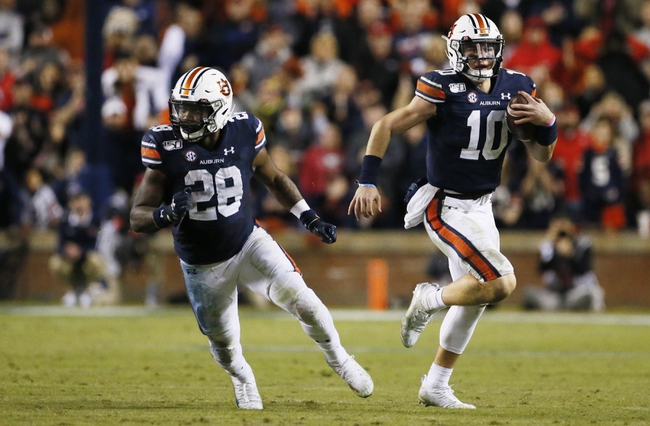 The Samford Bulldogs and the Auburn Tigers meet in a week 13 college football matchup from Jordan-Hare Stadium on Saturday.

The Auburn Tigers will look to bounce back after a 21-14 loss to Georgia in their last outing, falling to 7-3 on the year. Bo Nix led Auburn by throwing for 245 yards and a touchdown on 30 of 50 passing while also rushing for a team-high 42 yards and a touchdown. D.J. Williams and JaTarvious Whitlow combined for 49 rushing yards. Seth Williams led Auburn with 13 catches for 121 yards while Anthony Schwartz had 7 grabs for 45 yards and Eli Stove had a touchdown grab. Defensively, Jeremiah Dinson led the way with 8 total tackles including 7 solo tackles while Marlon Davidson had a sack and Daniel Thomas had 2 tackles for a loss. As a team, Auburn is averaging 415.9 yards of total offense and 30.8 points per game while allowing 325.8 yards of total defense and a stingy 17.8 points per game against this season.

Call me crazy, but I actually like Samford and the points here. Hear me out. Auburn could come out and take out their frustrations on Samford here after losing to Georgia, but a win over Samford wouldn’t do anything but add a win to their total on the year. The Tigers are out of the running for a spot in the conference championship and the national playoffs, and you’d have to think that Samford will be treating this game as their Super Bowl with it being the last game on their schedule this season. I just think that Samford has more drive for this game than Auburn does, so I’ll take a stab at Samford and the points