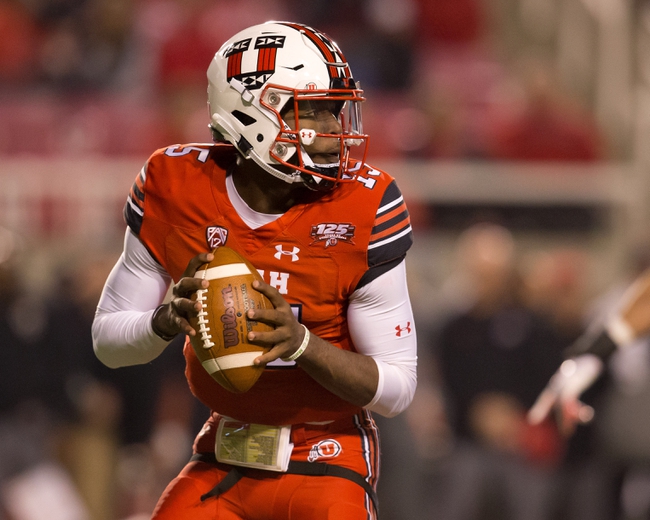 The Utah Utes and the Arizona Wildcats meet in a week 13 Pac-12 college football matchup from Arizona Stadium on Saturday night.

The Utah Utes come into this game looking to build on their six-game winning streak after a dominant 49-3 win over UCLA in their last outing. Tyler Huntley has thrown for 2,397 yards, 13 touchdowns and an interception on 74.2% passing while Zack Moss leads the Utes in rushing with 955 rushing yards and 13 touchdowns. Bryan Thompson leads Utah’s receiving group with 452 yards and 3 touchdowns while Brant Kuithe has 406 receiving yards and 4 TDs. Five other Utah receivers follow in the 200+ receiving yard club this season. Defensively, Devin Lloyd leads Utah with 66 total tackles while Julian Blackmon has 4 interceptions and Bradlee Anae has 10 sacks this year. As a team, Utah is averaging a strong 455.4 yards of total offense and 34.7 points per game while allowing 248.8 yards of total defense and 11.3 points per game against this season.

The Arizona Wildcats will be out to snap a five game losing streak after a 34-6 loss to Oregon in their last outing. Khalil Tate has thrown for 1,687 yards, 12 touchdowns and 8 interceptions on 60.8% passing while Grant Gunnell has thrown for 1,143 yards, 9 touchdowns and an interception on 66.9% passing. J.J. Taylor leads the Wildcats in rushing with 640 rushing yards and 5 touchdowns while Gary Brightwell has 363 rushing yards and 5 TDs of his own. Jamarye Joyner leads Arizona in receiving with 391 receiving yards with 3 TDs while Brian Casteel, Tayvian Cunningham and Cedric Peterson all have 300+ receiving yards this season. Defensively, Colin Schooler leads Arizona with 69 total tackles while Tony Field II is right behind with 68 total tackles. Jace Whittaker and Lorenzo Burns each have 3 interceptions while Jalen Harris has 3.5 sacks this season. As a team, Arizona is averaging 470.2 yards of total offense and 30.2 points per game while allowing 480.8 yards of total defense and 37 points per game against this season.

Arizona getting three free touchdowns at home would be worth a look, but the Wildcats are just struggling and even with their bowl lives hanging in the balance, I just don’t like Arizona’s chances here. The Wildcats have given up at least 41 points four times during this five game losing streak, including 51 and 56 in the two home games during that spell. Utah isn’t flashy, but the Utes know how to drive their opponents into the ground and can put points on the board with the best of them while suffocating the opposition on defense. I think Utah needs to make as much of a case as Oregon does with the playoff committee, so I’ll lay the points with Utah in what I see being a beatdown from start to finish.