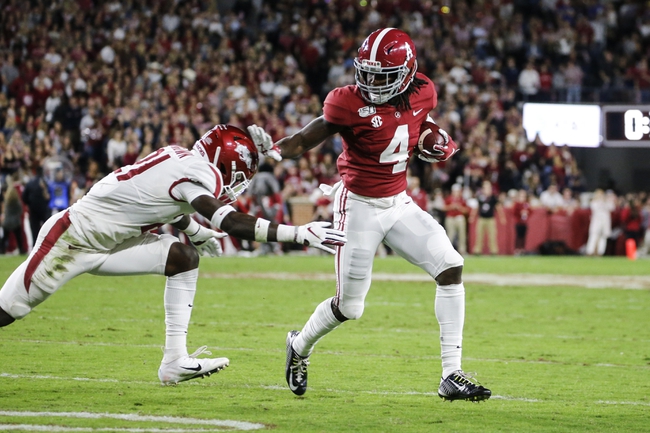 The Western Carolina Catamounts and the Alabama Crimson Tide meet in a week 13 college football matchup from Bryant-Denny Stadium in Tuscaloosa on Saturday.

The Alabama Crimson Tide will look to build on their 9-1 record after a 38-7 victory over Mississippi State in their last outing. Tua Tagovailoa threw for 256 yards on 14 of 18 passing with a pair of touchdowns before leaving the game due to a hip injury that’s effectively ended his season. Mac Jones filled in, throwing for 94 yards on 7 of 11 passing. Najee Harris rushed for 88 yards and 3 touchdowns on 17 carries while Brian Robinson Jr. added 56 rushing yards. Jerry Jeudy led the Tide with 7 grabs for 114 yards while DeVonta Smith had 5 catches for 92 yards. The aforementioned Najee Harris and Jaylen Waddle each had a touchdown grab for Alabama in the winning effort. Defensively, Shane Lee led Alabama with 10 total tackles as well as logging an interception in the victory. As a team, Alabama is averaging 510.6 yards of total offense and 46.8 points per game while allowing 329.2 yards of total defense and 17.5 points per game against this season.

I get Alabama being a massive favorite at home as they should be, being one of the nation's top teams against an FCS team that's 3-8. However, this game is nothing but a practice game for the Tide who are hoping for some help to get into the playoff picture. Alabama also has a history of taking it easier on teams they should blow out, as the Tide let the Citadel hang 17 points on them last year and only beat Chattanooga 31-3 a couple of years ago. I just think Alabama will want to make sure they get through this game as healthy as they were coming into it, and I just think they take it easy on Western Carolina here, letting the Catamounts cover.