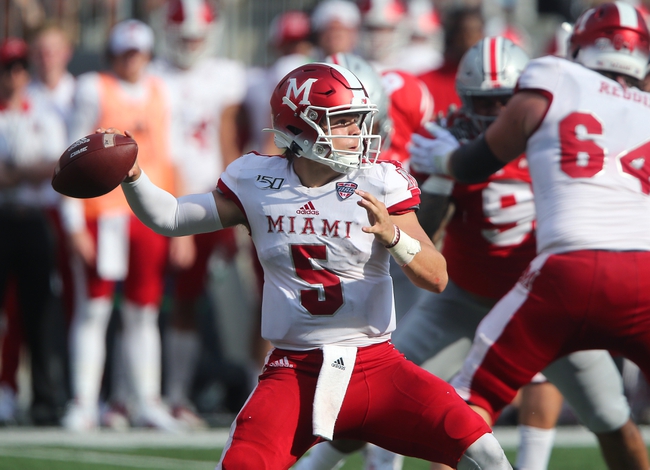 The Akron Zips and the Miami-Ohio RedHawks meet in college football action from Fred C. Yager Stadium on Wednesday night.

The Akron Zips will be looking for their first win of the season after falling to 0-10 with a 42-14 loss to Eastern Michigan last time out. Kato Nelson has thrown for 1,615 yards, 10 touchdowns and 6 interceptions on 55.8% passing while Brandon Lee leads the Zips in rushing with 177 rushing yards. Nate Stewart leads Akron with 34 catches for 463 receiving yards and 3 touchdowns while Jeremiah Knight and Dustin Burkhart each have 300+ receiving yards for the Zips this season. John Lako leads Akron with 116 total tackles including a team-high 54 solo tackles while Bubba Arslanian has 103 total tackles this year. As a team, Akron is averaging 264.2 yards of total offense and 10.6 points per game while allowing 400.9 yards of total defense and 36.3 points per game against this season.

The Miami-Ohio RedHawks will look to build on their current four game winning streak after a 44-3 win over Bowling Green last time out. Brett Gabbert has thrown for 1,734 yards, 9 touchdowns and 6 interceptions on 53.7% passing while Jaylon Bester leads the RedHawks with 436 rushing yards and 9 touchdowns and Tyre Shelton has 387 rushing yards. Jalen Walker leads Miami-Ohio in receiving with 348 receiving yards while James Maye isn’t far behind with 345 receiving yards. Dominique Robinson and Jack Sorenson each have 296 and 216 receiving yards while Luke Mayock has 110 receiving yards this season. Defensively, Ryan McWood leads the RedHawks with 75 total tackles while Sterling Weatherford has 69 total tackles and Myles Reid has 67 total tackles. Mike Brown has 3 interceptions while Lonnie Phelps has 4 sacks on the year. As a team, Miami-Ohio is averaging 309.4 yards of total offense and 24.8 points per game while allowing 381.3 yards of total defense and 28.8 points per game against this season.

The points would be worth a look given Akron’s success on the road against the RedHawks, but then you remember that the Zips are a dumpster fire this season. Akron has been getting blasted left and right, and even has a loss to UMass on their slate, a UMass team that gives up 45-50 points week in and week out. Early on Akron showed some promise offensively, but that’s just flamed out and pretty much dead. This is a huge number, but I’m still laying the points with Miami-Ohio in this one in a rout.