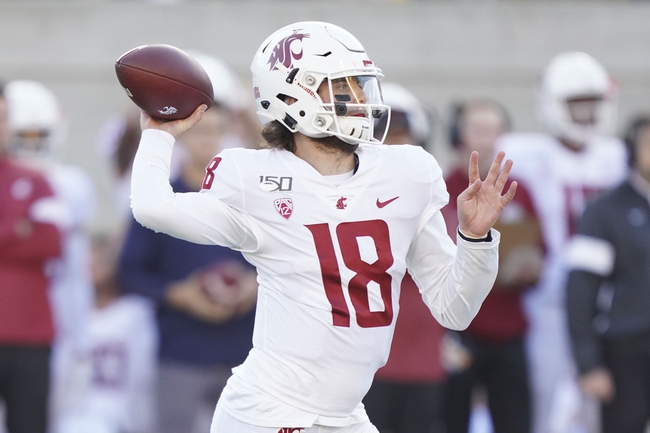 The Stanford Cardinal and the Washington State Cougars meet in a week 12 Pac-12 conference college football matchup from Martin Stadium on Saturday.

The Stanford Cardinal will look to get back to .500 after falling to 4-5 with a 16-13 road loss to Colorado last time out. K.J. Costello has thrown for 1,038 yards, 6 touchdowns and 3 interceptions on 61.1% passing while Cameron Scarlett leads Stanford on the ground with 763 rushing yards and 5 TDs. Colby Parkinson leads the Cardinal with 412 receiving yards while Michael Wilson, Connor Wedington and Simi Fehoko each have 300+ receiving yards for Stanford this season. Defensively, Andrew Pryts leads the Cardinal with 52 total tackles while Casey Toohill has 50 total tackles and a team-high 6 sacks this season and Paulson Adebo leads Stanford with 4 interceptions on the year so far. As a team, Stanford is averaging 351.3 yards of total offense and 21.6 points per game while allowing 407.8 yards of total defense and 26.7 points per game against this season.

The Washington State Cougars are in need of a win after dropping 5 of their last 6 games after a 33-20 loss to Cal last time out. Anthony Gordon has thrown for 3,794 yards, 34 touchdowns and 10 interceptions on 71% passing while Max Borghi leads the Cougars in rushing with 585 rushing yards and 7 touchdowns this season. Brandon Arconado leads Stanford in receiving with 721 receiving yards and 5 TDs while Easop Winston Jr. has a team-high 59 catches for 719 yards and 9 TDs. Dexmon Patmon has 560 receiving yards while Borghi and Travell Harris each have 400+ receiving yards and Davontavean Marin and Renard Bell each have 300+ receiving yards this season. Defensively, Jahad Woods leads the Cougars with 92 total tackles including a team-high 50 solo tackles while Will Rodgers III has 4 sacks and Marcus Strong and Skyler Thomas each have a pair of interceptions this season. As a team, Washington State is averaging 510.9 yards of total offense including the most passing yards per game in FBS with 433.1 yards per game and 39.3 points per game while allowing 447.6 yards of total defense and 30.1 points per game against this season.

The case you can make for Washington State is that the Cougars know how to sling the ball around the field and put points on the board, and Wazzu just kicked the crap out of the same Colorado team that just beat Stanford. However, even with how Washington State puts points on the board, it’s hard for me to lay this kind of line with a Cougars team that’s lost 5 of their last 6 games. Stanford has bowl aspirations of their own, and other teams have figured out how to stop the Cougars’ offense. I just think that Stanford is more than capable of keeping this one within single digits, so I’ll take a shot at Stanford and the points here.