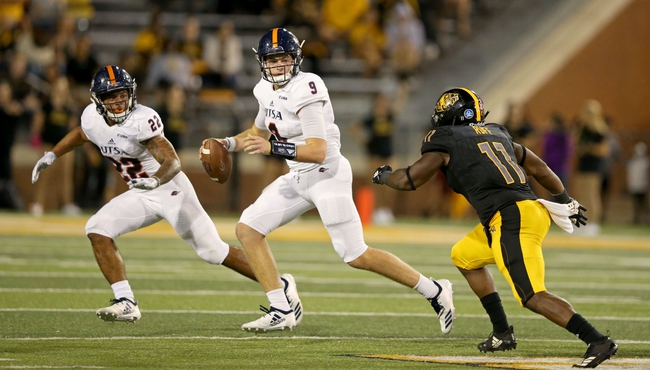 The Southern Miss Golden Eagles and the UTSA Roadrunners will match up on the college football field Saturday.

Southern Miss is 6-3 this year. The Eagles have fallen to MS State, Alabama and LA Tech but otherwise taken care of Alcorn State, Troy, UTEP, North Texas, Rice and UAB.

In the win over the Blazers, Southern Miss QB Jack Abraham had 164 yards and two scores, while Kevin Perkins managed 94 yards rushing. Quez Watkins added 87 yards and a TD off five grabs there.

Over on the UTSA side, they’re 4-5 this year. The Roadrunners have fallen to Baylor, Army, North Texas, UAB and Texas A&M but taken out Incarnate Word, UTEP, Rice and Old Dominion.

In the win over the Monarchs, UTSA QB Lowell Narcisse had 240 yards with a TD, and Sincere McCormick led the rush on 137 yards and two TDs, Zachary Franklin had 134 yards on six receptions there as well.

The Eagles have won their last two games, and four of their last five. In their victories, they’ve taken the games each by at least 14 points in each, but they weren’t really close (45-30) to LA Tech in the loss.

As for the Roadrunners, each of their last two wins has come by four points or fewer, but they lost to Texas A&M by a score of 45-14. I like UTSA to hang around in this one, but ultimately I think Southern Miss can cover.