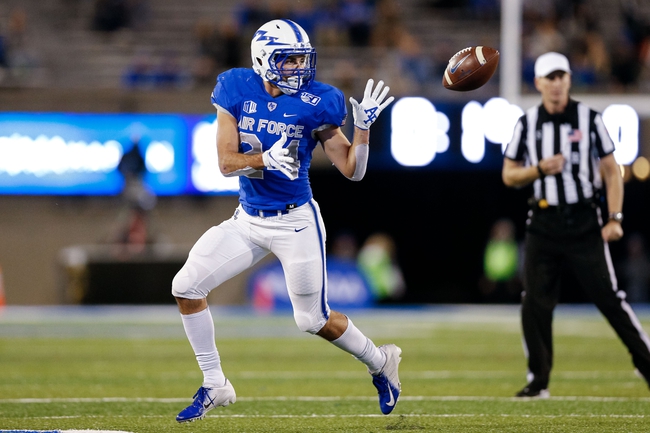 The Air Force Falcons will look to add to their current four game winning streak after a 17-13 win over Army last time out. Donald Hammond III leads the Falcons with 712 passing yards, 5 touchdowns and 4 picks while Kadin Remsberg leads the Falcons with 677 rushing yards and 7 touchdowns. Timothy Jackson is right behind with 661 rushing yards and 6 TDs while Taven Birdow has 563 rushing yards and 5 TDs of his own. Garaud Sanders leads the Air Force in receiving with 21 catches for 498 yards and 4 TDs while Benjamin Waters has 316 receiving yards this season. Defensively, Demonte Meeks leads Air Force with 64 total tackles as well as 3 sacks while Jordan Jackson has a team-high 3.5 sacks and Milton Bugg III has 3 interceptions this season. As a team, Air Force is averaging 432.6 yards of total offense and 34.4 points per game while allowing 313.4 yards of total defense and 20.9 points per game against this season.

The Colorado State Rams will look to add to their current three game winning streak after a 37-17 win over UNLV last time out. Patrick O’Brien leads Colorado State with 1,950 passing yards, 8 touchdowns and 3 interceptions while Marvin Kinsey Jr. has 703 rushing yards and 6 touchdowns to lead the Rams on the ground. Marcus McElroy and Dante Wright each have 200+ rushing yards while Warren Jackson leads Colorado State in receiving with 55 catches for 852 yards and 6 TDs and the aforementioned Wright has 641 receiving yards and 3 TD.s Defensively, Jamal Hicks leads Colorado State with 83 total tackles while Jan-Phillip Bombek has a team-high 5 sacks and Ellison Hubbard is right behind with 4.5 sacks. As a team, Colorado State is averaging 468.8 yards of total offense and 31.7 points per game while allowing 395.7 yards of total defense and 32 points per game against this season.

The Falcons have been one of my favorite teams to watch in the Mountain West this season, and it’s nice to see the Falcons back in the spotlight after a couple of down years. However, this line is a little bit funny to me. Sure, the Falcons should probably be favored as the better team, but Colorado State for the most part this season has been able to rack up points in a hurry. Air Force didn’t look all that impressive against Army, and maybe you could chalk that up to an option vs. option matchup. I just think that Colorado State has the ability offensively to keep up with Air Force if called upon, so I’ll take a shot with Colorado State and the points in this one.