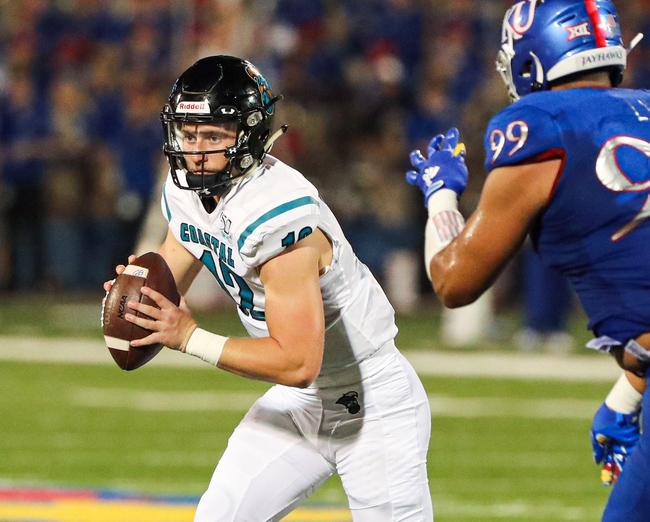 The Coastal Carolina Chanticleers will look to get back to .500 after falling to 4-5 with their 4th loss in their last 5 tries following a 48-7 beatdown loss to Louisiana last time out. Fred Payton leads Coastal with 1,071 passing yards, 7 touchdowns and 6 interceptions on 65.5% passing while Bryce Carpenter has thrown for 719 yards and 7 touchdowns on 64% passing. CJ Marable leads the Chanticleers in rushing with 650 rushing yards and 7 rushing TDs while the previously mentioned Carpenter has 309 rushing yards and Jacqez Hairston has 273 rushing yards and 5 TDs. Jaivon Heiligh leads Coastal with 40 catches for 436 yards while Isaiah Likely has 23 catches for 275 yards and 4 touchdowns. Marable and Jeremiah Miller each have 200+ receiving yards for the Chanticleers this season. Defensively, Teddy Gallagher leads the Chanticleers with 73 total tackles including 37 solo tackles while Tarron Jackson has a team-high 5.5 sacks and Chandler Kryst has 3 interceptions. As a team, Coastal Carolina is averaging 386.8 yards of total offense and 30.1 points per game while allowing 371.6 yards of total defense and 30.2 points per game against this season.

The Arkansas State Red Wolves will look to build on back-to-back wins after a 48-41 win over Louisiana-Monroe in their last outing. Layne Hatcher leads the Red Wolves with 1,560 passing yards, 14 touchdowns and 7 interceptions on 68.5% passing while Marcel Murray leads A-State in rushing with 647 rushing yards and 6 touchdowns. Omar Bayless leads the Red Wolves in receiving with 66 catches for 1,168 yards and 13 touchdowns while Kirk Merritt has 46 grabs for 531 yards and 8 TDs and Jonathan Adams Jr. has 495 receiving yards. Defensively, Darreon Jackson leads A-State with 75 total tackles including a team-high 43 solo tackles while B.J. Edmonds has 64 total tackles and William Bradley-King has a team-high 6 sacks. Jeremy Smith and Nathan Page each have a pair of interceptions for the Red Wolves this season. As a team, Arkansas State is averaging 437.3 yards of total offense and 34.2 points per game while allowing 488.3 yards of total defense and 36 points per game against this season.

The points are tempting with the Chanticleers, but the fact is that their starting QB in Fred Payton has a shoulder issue, leaving his status for this one up in the air, and Coastal just hasn’t looked all that good over the last month or so, falling apart after a 3-1 start to the year. Arkansas State has picked up their play lately and a win here would give them bowl eligibility. Both teams can rack up the points, but I just trust the Red Wolves to do it with more consistency, so I’ll lay the points with A-State at home here.