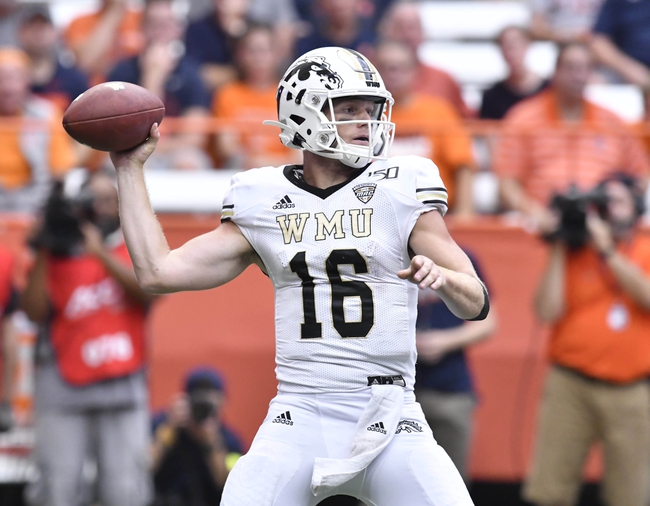 The Western Michigan Broncos and the Ohio Bobcats will match up in college football action on Tuesday.

In the win over Ball State, Western Michigan QB Jon Wassink has 124 yards passing, with 131 more and a TD rushing. LeVante Bellamy added 157 yards with three scores on the ground, and Giovanni Ricci had a 33-yard catch to lead the receivers.

Over on the Ohio side, they’re 4-5 so far. The Bobcats have wins over Rhode Island, Buffalo, Kent State and Ball State but they’ve fallen to Pitt, Marshall, Louisiana, NIU and Miami-OH.

In the loss to the RedHawks, Ohio QB Nathan Rourke led the rushing with 89 yards and two scores, and passed for 133 and a TD. Isaiah Cox had 35 yards receiving off two catches.

Since their loss to EMU a couple weeks back, the Broncos have put up two pretty solid offensive performances with 84 combined points scored. That makes at least 35 in three of the last four games for Western Michigan.

Over on the Bobcats’ side, they had a nice scoring run going for a couple of games before falling to Miami, so I’m not completely on that bandwagon right now. I’m going to have to stick with the Broncos here.

Andrew has been writing about college, professional, and fantasy sports betting since 2013.
Follow Andrew Jett on Twitter @PickDawgzAndrew
https://www.youtube.com/watch?v=FMOuLyPbuM