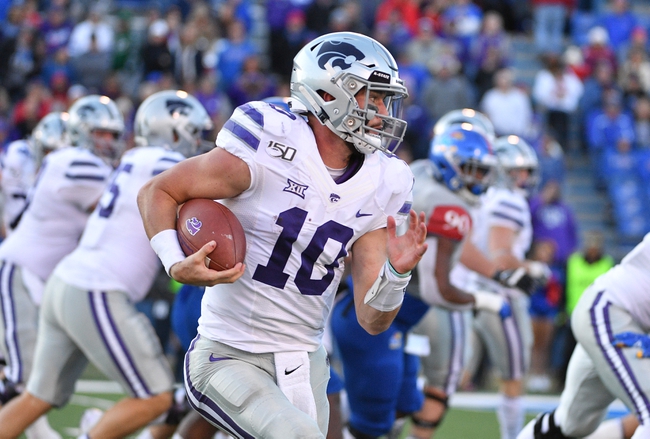 The Kansas State Wildcats will look to add to their current three game winning streak after a 38-10 road win over Kansas in their last outing. Skylar Thompson has thrown for 1,336 yards, 7 touchdowns and an interception on 60.5% passing while James Gilbert leads K-State in rushing with 558 yards and 5 touchdowns. The aforementioned Thompson has added 331 rushing yards and 10 rushing TDs for the Wildcats while Jordon Brown and Harry Trotter each have 200+ rushing yards for the Wildcats this season. Dalton Schoen leads Kansas State’s receiving group with 25 catches for 389 yards and 3 touchdowns while Malik Knowles has 231 receiving yards and Nick LEnners, Phillip Brooks and Wykeen Gill each have had 100+ receiving yards this season. Defensively, Denzel Goolsby leads Kansas State with 36 total tackles while Wyatt Hubert leads the Wildcats with 4 sacks, Trey Dishon has added 3 sacks and AJ Parker has a team-high 3 interceptions for the Wildcats this season. As a team, Kansas State is averaging 391.1 yards of total offense and 33.4 points per game while allowing 353 yards of total defense and 20.4 points per game against this season.

The Texas Longhorns will look to find some consistency after alternating wins and losses in each of their last four games following a 37-27 loss to TCU in their last outing prior to their bye week. Sam Ehlinger has thrown for 2,378 yards, 23 touchdowns and 7 interceptions on 65.7% passing while Keaontay Ingram has rushed for 494 yards and 4 touchdowns. Roschon Johnson has added 418 rushing yards and 4 touchdowns of his own while the aforementioned Ehlinger has 361 rushing yards and 5 TDs. Devin Duvernay leads Texas with 800 receiving yards on 69 catches with7 touchdowns while Collin Johnson is 2nd with 387 receiving yards. Brennan Eagles has 367 receiving yards with 5 touchdowns while Jake Smith has 207 receiving yards and 5 touchdowns of his own this season. Defensively, Joseph Ossai and Brandon Jones each have a team-high 55 total tackles with a pair of interceptions while Juwan Mitchell leads the Longhorns with 3 sacks this season. As a team, Texas is averaging 477.6 yards of total offense and 39.1 points per game while allowing 465.5 yards of total defense and 31.5 points per game against this season.

The Wildcats haven’t been flashy, but Kansas State has played some solid football, including that massive win over Oklahoma followed up by pummelling Kansas. Texas on the other hand, has had an extra week to rest up and prepare for this game, but that doesn’t change the fact that the Longhorns have been far from dominant at home this season. The Longhorns had to battle to scrape by the same Kansas Jayhawks that the Wildcats just beat the heck out of, allowing 48 points in the win. Texas’ last four home games have either been an outright loss, or a win by no more than 6. I just think Kansas State poses a tougher test than a lot of people are giving them credit for, so I’ll take a shot at Kansas State and the points in a game I see the Wildcats winning outright.