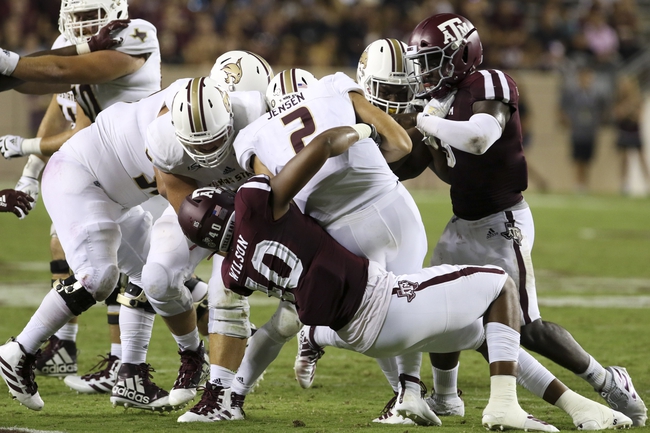 The South Alabama Jaguars will be out to snap a six-game losing streak after a 30-3 loss to Appalachian State in their last outing. Cephus Johnson has thrown for 900 yards, 5 touchdowns and 7 interceptions on 51.5% passing while Tra Minter leads the Jaguars in rushing with 657 rushing yards and 2 touchdowns. Kawaan Baker leads the Jaguars in receiving with 401 receiving yards and 3 touchdowns while Jalen Tolbert has 268 receiving yards this season. Defensively, Nick Mobley leads the Jaguars with 65 total tackles while DJ Daniels is 2nd with 55 total tackles including a team-high 40 solo tackles. Jeffery Whatley leads South Alabama with 2.5 sacks while Travis Reed has a pair of interceptions this season. As a team, South Alabama is averaging 290.9 yards of total offense and 14.6 points per game while allowing 410 yards of total defense and 30.4 points per game against this season.

The Texas State Bobcats will be out to snap a three-game losing skid of their own after a 31-3 loss to ULL in their last outing. Gresch Jensen has thrown for 1,291 yards, 5 touchdowns and 6 interceptions on 62.6% passing while Caleb Twyford leads Texas State with 457 rushing yards and 2 touchdowns. Hutch White leads the Bobcats’ receiving group with 299 receiving yards and 41 catches while Trevis Graham Jr., Jah’Marae Sheread and Jeremiah Haydel each have 200+ receiving yards this season. Defensively, Bryan London II has a team-high 80 tackles including 38 solo tackles while Nikolas Daniels has 60 total tackles including a team-high 4 sacks. Jarron Morris and JaShon Waddy each have a pair of interceptions this season. As a team, Texas State is averaging 305.6 yards of total offense and 16.2 points per game while allowing 415.6 yards of total defense and 30.1 points per game against this season.

Neither of these teams are going anywhere come bowl season, so it’s hard to pick a side between two teams playing for nothing but pride and some bragging rights. However, even at home, Texas State has been brutal against the number this season, with their lone cover in eight games coming against subdivision opponent Nicholls State, and a push in their win against a really good Georgia State team. South Alabama doesn’t have the wins to show for it, but the Jaguars have done a solid job covering the number this season, and while it’s the first time the Jags have dealt with a single-digit spread this season, I think that South Alabama can do enough to keep this one within 3-4 points, so I’ll take the free touchdown with USA in this one.

Get Premium Picks Start Winning Now »
The pick in this article is the opinion of the writer, not a PickDawgz site consensus.
Previous Pick
New Mexico vs. Air Force - 11/9/19 College Football Pick, Odds, and Prediction
Next Pick
Michigan State vs. Illinois - 11/9/19 College Football Pick, Odds, and Prediction