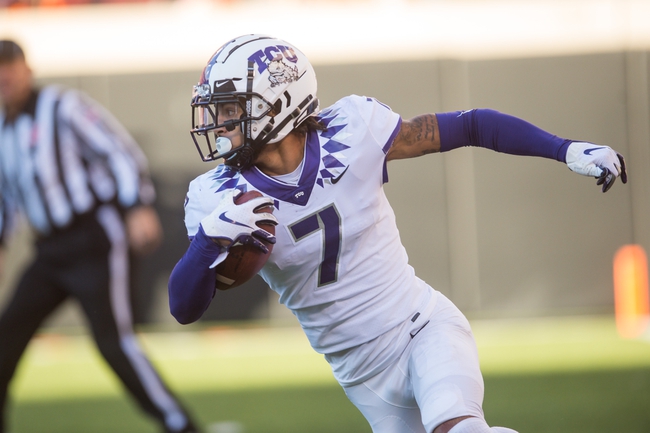 The Baylor Bears and the TCU Horned Frogs will match up on the college football gridiron Saturday.

Baylor cruises in here at 8-0 so far. The Bears have taken out SFA, UTSA, Rice, Iowa State, Kansas State, Texas Tech, OK State and West Virginia in succession so far.

In the WVU win, Baylor QB Charlie Brewer managed 277 yards with two TDs, and JaMycal Hasty led the rush on 77 yards. Denzel Mims had 99 yards and a TD on his five receptions.

Over on the TCU side, they’re 4-4 this year. The Frogs have wins over AR-Pine Bluff, Purdue, Kansas and Texas but they’ve lost to SMU, Iowa State, Kansas State and OK State.

In the loss to OSU, TCU quarterback Max Duggan had 258 yards with a TD and three INTs, and also led the rush on 86 yards and a TD. Jalen Reagor was tops in receiving with 128 yards on seven catches.

Baylor’s perfect record hasn’t come without some squeakers. The Bears have won by eight points or fewer four times, including a 17-14 eke-out against West Virginia in their last game.

TCU has shown they can score, and they should give the Bears some trouble. The Frogs put up 37 points versus Texas and 27 against OK State, but they also allowed 27 and 34 points in those games, respectively.

This is something of a coin-flip game, but I’m going to stick with Baylor to find a way to win.