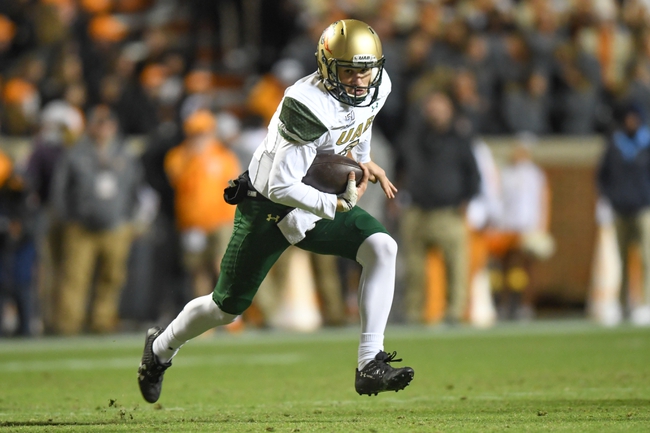 The UAB Blazers and the Southern Miss Golden Eagles will match up on the college football circuit Saturday.

UAB enters here at 6-2 so far. The Blazers have wins over AL State, Akron, South Alabama, Rice, UTSA and ODU but have fallen to Western Kentucky and Tennessee.

In the loss to Tennessee, UAB quarterback Tyler Johnson had 136 yards and three interceptions, while Lucious Stanley rushed for 34 yards. Myron Mitchell added 63 yards on five catches as well.

Over on the Southern Miss side, they’re 5-3 so far. The Eagles have losses to MS State, Alabama and LA Tech but also have wins versus Alcorn State, Troy, UTEP, North Texas and Rice.

In the win over the Owls, Southern Miss QB Jack Abraham had 207 yards with one INT, and Kevin Perkins added 86 yards with two scores. Tim Jones put up 10 receptions for 96 yards to lead the team there.

UAB was pretty outmatched against Tennessee, and couldn’t get anything going on offense. Prior to that the Blazers had been on a pretty good run in their three-game win streak, with at least 33 points scored in each of those outings.

Southern Miss has had some mixed results over their last four, but on the whole they’ve been pretty consistent at putting up points. Still, I like UAB to bounce back and cover here.