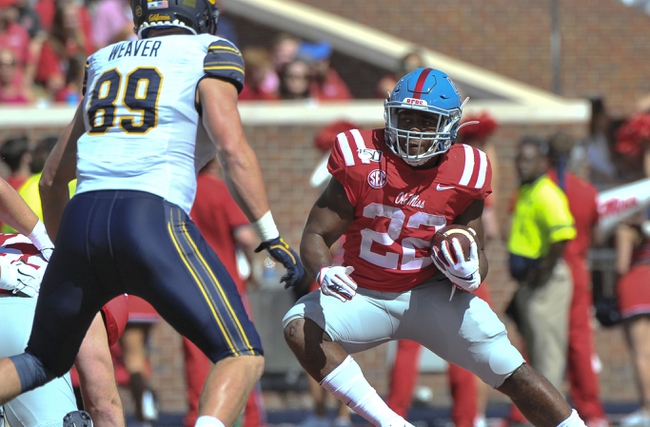 The New Mexico State Aggies and the Ole Miss Rebels meet in a week 11 college football matchup from Vaught Hemingway Stadium on Saturday.

The New Mexico State Aggies will be looking for their first win of the season after falling to 0-8 with a 41-7 loss to Georgia Southern in their last outing. Josh Adkins has thrown for 1,797 yards, 9 touchdowns and 14 interceptions on 62.2% passing while Jason Huntley leads New Mexico State with 575 rushing yards and 5 TDs and Christian Gibson has added 258 rushing yards. Tony Nicholson leads the Aggies in receiving with 43 grabs for 472 yards and 3 touchdowns while OJ Clark, Naveon Mitchell and Izaiah Lottie each have 200+ receiving yards this year. Defensively, Javahn Ferguson leads New Mexico State with 89 total tackles including 36 solo tackles while Cedric Wilcots II and Devin Richardson each have a pair of sacks and Austin Perkins has a pair of interceptions this season. As a team, New Mexico State is averaging 345 yards of total offense and 18 points per game while allowing 478.9 yards of total defense and 42.4 points per game against this season.

The Ole Miss Rebels need a win after losing three straight and 5 of 6 following a 20-14 loss to Auburn in their last outing. Matt Corral has thrown for 1,114 yards while John Rhys Plumlee added 542 passing yards with each QB logging 4 touchdowns and 2 interceptions. Plumlee leads the Rebels in rushing with 600 rushing yards and 5 touchdowns while Scottie Phillips has 542 rushing yards and 5 touchdowns and Jerrion Ealy has 428 rushing yards and 4 touchdowns. Snoop Conner has 327 rushing yards and 3 TDs while Elijah Moore leads Ole Miss’ receiving group with 52 catches for 635 yards and 4 scores. Defensively, Lakia Henry leads Ole Miss with 67 total tackles while Sam Williams leads the Rebels with 4.5 sacks this season. As a team, Ole Miss is averaging 415.6 yards of total offense and 24.6 points per game while allowing 420.1 yards of total defense and 26.2 points per game against this season.

This is a whole lot more points than I’m willing to normally lay with a 3-6 team like Ole Miss. However, the Rebels have been competitive lately even without the wins to show for it, hanging around with Auburn and Alabama on the road as well as Texas A&M at home. New Mexico State has just been bad for most of the season, getting beat on left and right, and scoring 17 points or less in 6 of their 8 games this season. I personally wouldn’t bet this game, but if forced to pick, I’d lay the points with Ole Miss as I just can’t back the Aggies in any way, shape or form right now.