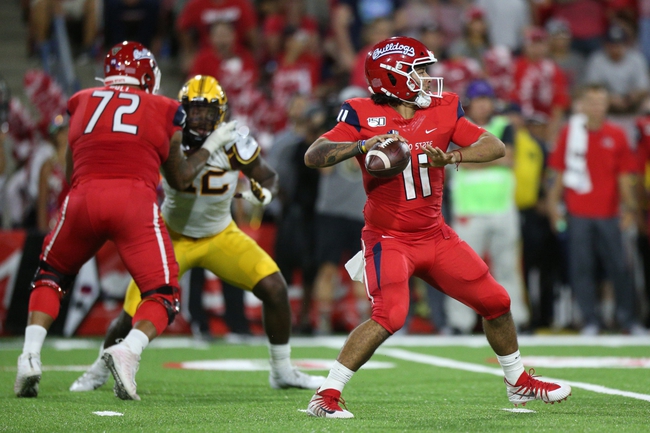 The Utah State Aggies and the Fresno State Bulldogs meet in a week 11 Mountain West conference tilt from Bulldog Stadium on Saturday.

The Utah State Aggies will look to rebound after back-to-back losses following a 42-14 beatdown at the hands of in-state rival BYU last time out. Jordan Love has thrown for 2,014 yards, 9 touchdowns and 12 interceptions on 59.7% passing while Gerold Bright leads Utah State in rushing with 535 rushing yards and 5 touchdowns and Jaylen Warren has 414 rushing yards and 4 TDs. Siaosi Mariner leads Utah State in receiving with 34 catches for 527 yards and 4 touchdowns while Jordan Nathan has 341 receiving yards and Deven Thompkins, Savon Scarver and Caleb Repp each have 200+ receiving yards this season. Defensively, David Woodward leads Utah State with 93 total tackles including 53 solo tackles while Nick Heninger has a team-high 3 sacks this season. As a team, Utah State is averaging 421.1 yards of total offense and 27.1 points per game while allowing 444 yards of total defense and 26.4 points per game against this season.

Part of me wants to take Utah State because they’re capable of hanging offensively based on the talent on the team, but the fact is that the Aggies have put up a couple of duds in recent weeks against BYU and Air Force. The Aggies have been outscored 73-13 in their last two road games as well. Now one of those games was against LSU, but still, the Aggies have got to improve on the road before I take them with a low amount of points on the other side. Fresno State has been up and down, but the Bulldogs have been on more often than not offensively this season, and should be able to win this one by at least a field goal, so I’ll lay the points with the Bulldogs in this one.