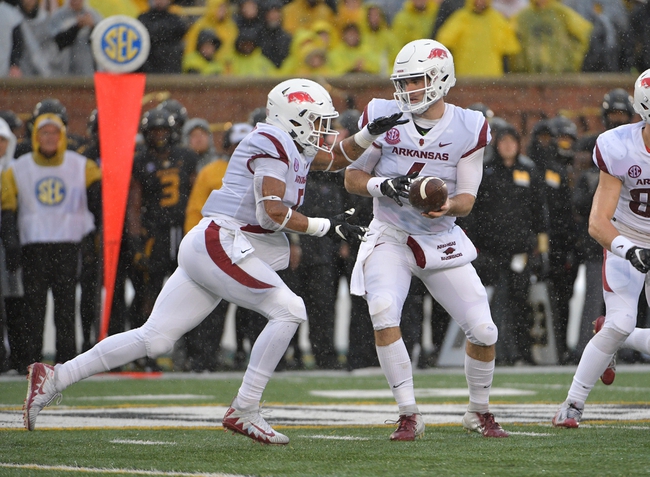 The Western Kentucky Hilltoppers will look for a big road win to rebound from back-to-back losses after a 35-24 loss to FAU in their last outing. Ty Storey has thrown for 1,477 yards, 7 touchdowns and 5 interceptions on 69.8% passing while Gaej Walker leads the Hilltoppers with 783 rushing yards and 6 touchdowns. Lucky Jackson leads WKU in receiving with 55 catches for 766 yards and Jahcour Pearson has 51 grabs for 512 yards and 4 TDs. Jacquez Sloan, Joshua Simon and Quin Jernighan each have 200+ receiving yards for WKU this season as well. Defensively, DeAngelo Malone leads the Hilltoppers with 72 total tackles including a team-high 42 solo tackles as well as a team-high 9 sacks. Kyle Bailey has 70 total tackles and a pair of interceptions while Juwuan Jones has 4.5 sacks for the Hilltoppers. As a team, Western Kentucky is averaging 360.3 yards of total offense and 22.6 points per game while allowing 317.4 yards of total defense and 20.7 points per game against this season.

The Arkansas Razorbacks could definitely use a win to snap a six game losing streak after a 54-24 beatdown at the hands of Mississippi State in their last outing. Nick Starkel has thrown for 1,118 yards, 7 touchdowns and 10 interceptions on 55% passing while Rakeem Boyd leads the Hogs in rushing with 820 rushing yards and 6 touchdowns. Devwah Whaley also has 254 rushing yards with 3 touchdowns while Cheyenne O’Grady leads Arkansas in receiving with 33 catches for 372 yards and 3 touchdowns. Trey Knox, Mike Woods and Treylon Burks each have 300+ receiving yards for the Razorbacks this season. Defensively, De’Jon Harris leads Arkansas with 75 total tackles while McTelvin Agim leads Arkansas with 5 sacks and Kamren Curl has a pair of interceptions this season. As a team, Arkansas is averaging 355.1 yards of total offense and 22.7 points per game while allowing 444.2 yards of total defense and 35.2 points per game against this season.

I get Arkansas being favored at home and the fact that the Hogs play the tougher opposition in the SEC. However, Western Kentucky is no slouch, and the Hilltoppers have rebounded nicely from that shock season-opening loss to Central Arkansas. WKU’s starting QB, Ty Storey also knows how the Hogs offense runs as he was Arkansas’ quarterback last season and you have to imagine that the Hilltoppers want to get their guy some revenge against his old team. The Razorbacks are just in shambles right now, and while I wouldn’t be surprised if Arkansas won here, I think all of the angles point to WKU pulling off an upset here so I’ll take the points with the Hilltoppers.