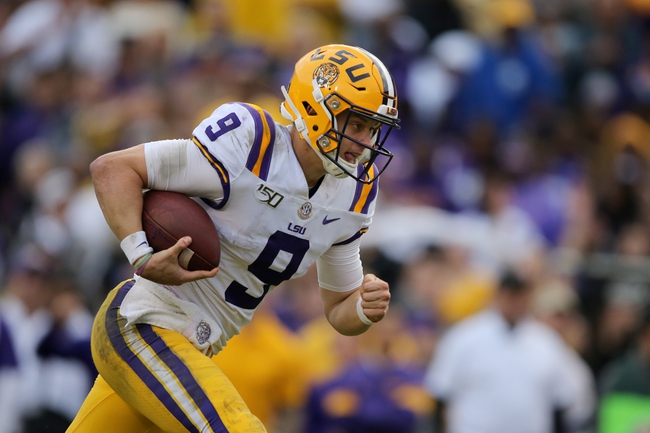 The top two teams in the country square off in a heavyweight week 11 SEC college football matchup as the LSU Tigers take on the Alabama Crimson Tide from Bryant-Denny Stadium on Saturday afternoon.

The LSU Tigers will look for a massive road win to remain unbeaten after improving to 8-0 on the year with a hard-fought 23-20 win over Auburn in their last outing. Joe Burrow has thrown for 2,805 yards, 30 touchdowns and 4 interceptions on 78.8% passing while Clyde Edwards-Helaire leads LSU in rushing with 683 rushing yards and 8 TDs. Justin Jefferson leads LSU in receiving with 55 grabs for 819 yards and 9 touchdowns while Ja’Marr Chase has 43 catches for 749 yards and 9 touchdowns of his own. Terrace Marshall Jr. has 333 receiving yards and Thaddeus Moss has 246 receiving yards as well for LSU this season. Defensively, Jacob Phillips leads LSU with 64 total tackles, including a team-high 31 solo tackles while Derek Stingley JR. has a team-high 4 interceptions and Michael Divinity Jr. has 3 sacks to lead LSU. As a team, LSU sits 4th in the country averaging 534 yards of total offense and 46.8 points per game while allowing 316.5 yards of total defense and 20 points per game against this season.

The Alabama Crimson Tide will also look to remain unbeaten by taking down a rival in LSU after climbing to 8-0 with a 48-7 win over Arkansas in their last outing. Tua Tagovailoa has thrown for 2,166 yards, 27 touchdowns and 2 interceptions on 74.7% passing while Najee Harris leads Alabama in rushing with 642 rushing yards and 5 touchdowns and Brian Robinson Jr. comes in 2nd with 356 rushing yards and 4 TDs. DeVonta Smith leads Alabama with 721 receiving yards and 9 receiving TDs while Jerry Jeudy has a team-high 52 catches for 682 yards and 8 touchdowns. Henry Ruggs III has 26 catches for 513 yards and 6 touchdowns as well while Jaylen Waddle has 297 receiving yards. Defensively, Xavier McKinney leads Alabama with 56 total tackles including a team-high 34 solo tackles while Trevon Diggs has a team-high 3 interceptions. Terrell Lewis leads Alabama with 6 sacks while Anfernee Jennings has 4 sacks and Shane Lee has 50 total tackles and 3.5 sacks this season. As a team, Alabama is averaging 506.9 yards of total offense while boasting the 2nd-highest scoring offense in the country, pouring in 48.6 points per game while allowing 307.9 yards of total defense and 15.2 points per game against this season.

Okay, I get that LSU has 8 in a row against Alabama, with 6 of those games being decided by double-digits. However, I wouldn’t be so quick to just jump on Bama, even at home. This is the best that the LSU offense has looked in some time, and while Alabama poses the stiffest challenge to the Tigers’ unbeaten mark,. Joe Burrow has turned this LSU offense around from what we’ve seen in past years and has made magic happen. While Tua Tagovailoa has had an extra week to rest up and get healthy, you have to imagine there might be just the slightest bit of rust getting back up to game speed. Even if there isn’t and all things are equal, Alabama has some solid margins of victory this season, but the Tide tend to let teams hang around for the most part and Alabama hasn’t played the toughest of schedules up to this point. I think LSU’s talented offense and solid defense is more than capable of keeping this one close. I’m going to take LSU and the points in a game that could end up coming down to a last second kick. I also may put a little something on the money line for LSU here as well.