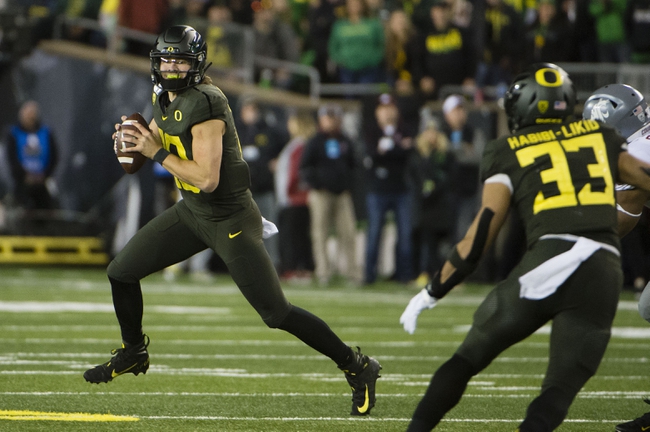 The Oregon Ducks and the USC Trojans meet in a week 10 Pac-12 conference college football matchup from the Los Angeles Memorial Coliseum on Saturday night.

The USC Trojans will look to build on back-to-back wins after a 35-31 win over Colorado in their last outing. Kedon Slovis has thrown for 1,625 yards, 13 touchdowns and 6 interceptions while Vavae Malepeai leads USC in rushing with 406 rushing yards and 4 touchdowns. Markese Stepp and Stephen Carr each have 3 rushing TDs with Stepp adding 307 rushing yards to Carr’s 266. Michael Pittman Jr. leads USC with 755 receiving yards and 7 touchdown grabs while Tyler Vaughns has 638 receiving yards and 5 touchdowns. Amon-Ra St. Brown has 432 receiving yards with 4 TD grabs of his own while Drake London, the aforementioned Carr and Erik Krommenhoek each have 100+ receiving yards this season. John Houston Jr. leads the Trojans with 70 total tackles including a team-high 43 solo tackles while Drake Jackson leads USC with 3.5 sacks this year. As a team, USC is averaging 442.4 yards of total offense and 31.2 points per game while allowing 429.5 yards of total defense and 24.9 points per game against this season.

Getting USC as a home dog is worth a look as the Trojans are 4-0 SU this season. The Trojans can also not afford to slip up if they want to keep pace with Utah in the Pac-12 South race. However, Oregon, despite giving up 31+ points in back-to-back weeks, managed to avoid the letdown after their big-time road win against Washington by outdueling Washington State and I just think that the Ducks are going to be the toughest test yet for this USC defense. Oregon can make a legitimate case to the playoff committee with an 11-1 record with the lone loss coming to a good Auburn team on a neutral field and a loss to USC would dent those aspirations. I’ll lay the points with Oregon on the road in this one.