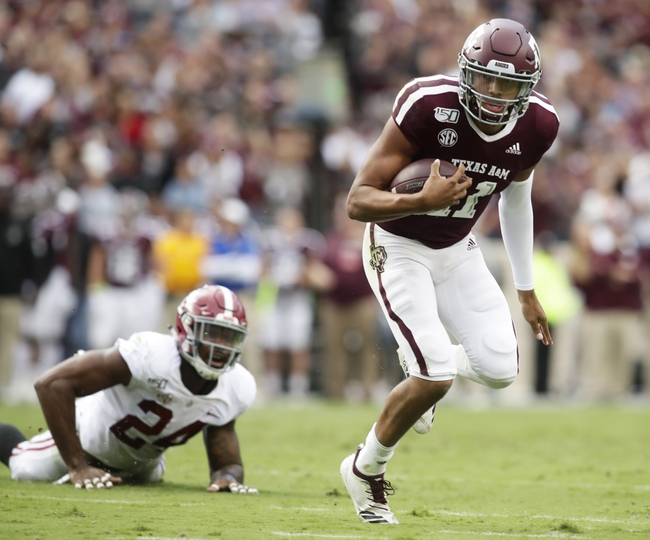 The UTSA Roadrunners and the Texas A&M Aggies meet in a week 10 college football tilt from Kyle Field on Saturday afternoon.

The UTSA Roadrunners will look to pull off a massive road upset after improving to 3-5 on the year with a 31-27 win over Rice in their last outing. Lowell Narcisse has thrown for 485 yards, 3 touchdowns and 3 interceptions on 48.6% passing while Sincere McCormick has rushed for 567 yards and 6 touchdowns. Carlos Strickland II leads the Roadrunners with 21 catches for 215 yards while McCormick and Tariq Woolen each have 100+ receiving yards for UTSA this season. Defensively, Andrew Martel leads UTSA with 46 total tackles while DeQuarius Henry has 3.5 sacks this season. As a team, UTSA is averaging 322.9 yards of total offense and 19.4 points per game while allowing 393.6 yards of total defense and 31.7 points per game against this season.

The Texas A&M Aggies will look to make a statement and build on their 5-3 record after a 49-30 win over Mississippi State in their last outing. Kellen Mond has thrown for 2,003 yards, 16 touchdowns and 6 interceptions on 63.5% passing while Isaiah Spiller leads the Aggies in rushing with 450 rushing yards and 5 touchdowns and the previously mentioned Mond also has 352 rushing yards and 5 rushing scores as well. Jhamon Ausbon leads A&M’s receiving group with 46 grabs for 608 yards and 3 touchdowns while Quartney Davis has 441 yards with 4 touchdowns and Kendrick Rogers has 272 yards. Jalen Wydermyer has 235 receiving yards and a team-high 5 receiving TDs this season. As a team, Texas A&M is averaging 412.8 yards of total offense and 33.1 points per game while allowing 348.5 yards of total defense and 22.9 points per game against this season.

I’d like to give the Roadrunners a chance with the boatload of points, but I just don’t like the spot the Roadrunners find themselves in right now. They have to play on the road, with their backup QB at the home of the 12th man. Texas A&M has had some moments of their own, but the Aggies do their best work at home where they’ve pummelled on lower teams and have decent losses to Auburn and Alabama this season. UTSA’s wins came against a subdivision opponent and a pair of teams in UTEP and Rice that are a combined 1-14, and 0-8 in C-USA play. It’s a lot of points, but I don’t see how UTSA keeps this one close so I’ll lay the points but realistically I’m not going near this game.