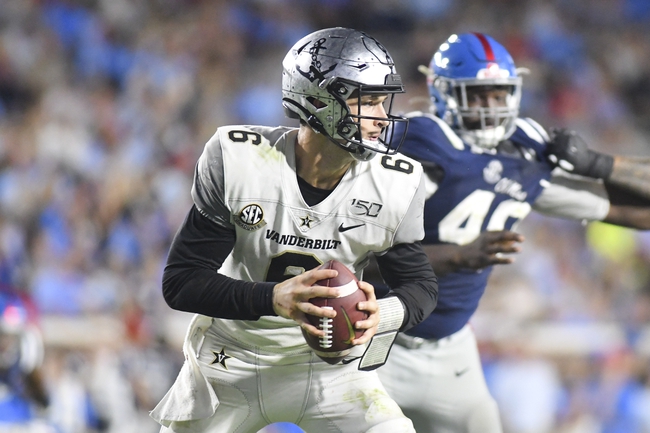 The Vanderbilt Commodores and the South Carolina Gamecocks meet in a week 10 SEC college football matchup from Williams-Brice Stadium on Saturday.

The Vanderbilt Commodores have had a week to prepare for this game after picking up their first conference win of the season with a 21-14 win over Missouri last time out. Riley Neal has thrown for 1,147 yards, 5 touchdowns and 4 interceptions on 58.2% passing while Ke’Shawn Vaughn leads Vanderbilt in rushing with 703 rushing yards and 6 touchdowns. Kalija Lipscomb leads Vanderbilt with 32 catches for 377 yards while Cam Johnson and the previously mentioned Vaughn each have 200+ receiving yards this season. Defensively, Dimitri Moore leads the Commodores with 51 total tackles while Andre Mintze has 3 sacks this year. As a team, Vanderbilt is averaging 336.1 yards of total offense and 18.4 points per game while allowing 456 yards of total defense and 33.6 points per game against this season.

The South Carolina Gamecocks will look to rebound from back-to-back defeats after a 41-21 loss to Tennessee in their last outing. Ryan Hilinski leads the Gamecocks with 1,517 yards through the air along with 8 touchdowns and 3 interceptions on 59.2% passing while Tavien Feaster leads the Gamecocks in rushing with 572 rushing yards and 5 touchdowns and Rico Dowdle has 457 rushing yards and 4 TDs. Bryan Edwards leads South Carolina’s receiving group with 48 catches for 587 yards and 4 touchdowns while Shi Smith has 36 grabs for 408 yards this year. Defensively, Ernest Jones leads South Carolina with 62 total tackles including 33 solo tackles while T.J. Brunson is right behind with 60 total tackles. Israel Mukuamu has 4 interceptions while Javon Kinlaw has a team-high 5 sacks and D.J. Woonum is right behind with 4.5 sacks and Aaron Sterling has 4 sacks. As a team, South Carolina is averaging 405.4 yards of total offense and 27.6 points per game while allowing 407.8 yards of total defense and 27.2 points per game against this season.

It’s hard for me to make a case for Vanderbilt who only covered their first game in their last outing, but it’s even harder for me to make a case for South Carolina who hasn’t looked good in their last couple of games especially in that disappointing loss to Tennessee. Vanderbilt is coming off of that win against a very good Missouri team as 21-point underdogs and while this isn’t a game I’m looking to put my money on, if forced to pick, I’d take Vanderbilt and the points in this one.