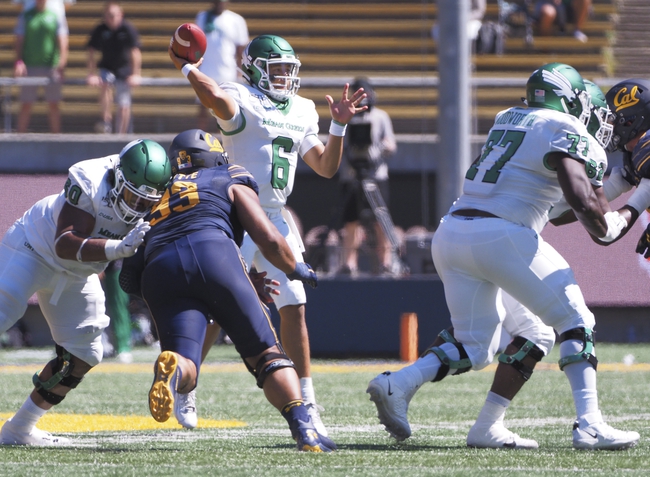 The UTEP Miners and the North Texas Mean Green meet in a week 10 C-USA college football matchup from Apogee Stadium on Saturday afternoon.

The UTEP Miners will be out to snap a six-game losing streak after a 42-21 loss to the Louisiana Tech Bulldogs in their last outing. Kai Locksley threw for 227 yards and a touchdown while also rushing for a score. Treyvon Hughes led the Miners in rushing with 60 yards and a TD while Josh Fields chipped in 52 rushing yards and Jacob Cowing led the Miners’ receiving corps with 70 receiving yards and a touchdown. Justin Garrett added a team-high 5 grabs for 60 yards while Tre’Shon Wolf had 4 catches for 44 yards and Alan Busey had 35 receiving yards for UTEP as well. Defensively, Michael Lewis led the Miners with 14 total tackles including 10 solo tackles while Justin Rogers recorded an interception. As a team, UTEP is averaging 301.2 yards of total offense and 17.7 points per game while allowing 408.3 yards of total defense and 33 points per game against this season.

The North Texas Mean Green will look to rebound after a heartbreaking 39-38 loss to Charlotte in their last outing. Mason Fine threw for 394 yards and 5 touchdowns on 26 of 38 passing while Tre Siggers led the Mean Green in rushing with 131 rushing yards. Jyaire Shorter had 3 grabs for a team-high 111 yards and 3 touchdowns while Jaelon Darden had 5 grabs for 104 yards and a TD and Michael Lawrence added a team-high 6 catches for 82 yards and a touchdown. Defensively, Khairi Muhammad led North Texas with 13 total tackles while Taylor Robinson and Nick Harvey each had 10 total tackles with Robinson adding a team-high 8 solo tackles. As a team, North Texas is averaging 460.1 yards of total offense and 32.9 points per game while allowing 435.9 yards of total defense and 33.2 points per game against this season.

I’d like to give UTEP a shot with the points here, but the issue is that the Mean green are the much better team, and side-by-side it’s really not that close. UTEP has had a lot of recent success in this matchup, but the Mean Green are better on offense and I expect Fine to get back to form and air it out all over the field on this terrible UTEP defense, so I’ll la the points with North Texas here.