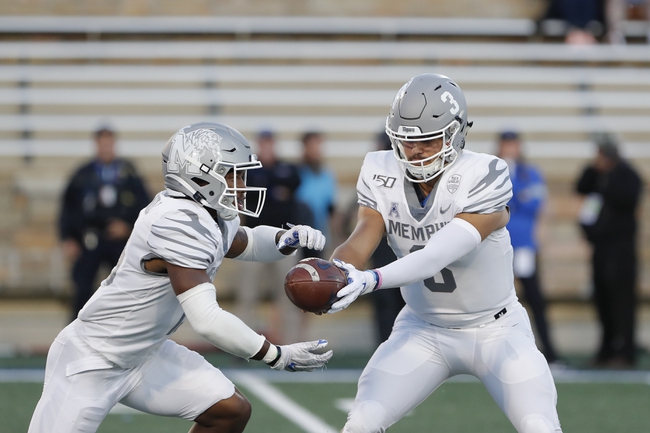 The SMU Mustangs look to improve to 9-0 on the season and remain a contender for an AAC title. The SMU Mustangs have won six of their last seven road games. Shane Buechele is completing 63.2 percent of his passes for 2,325 yards, 20 touchdowns and seven interceptions. Buechele has two or more touchdown passes in each of his last seven games. Reggie Roberson Jr. and James Proche have combined for 1,495 receiving yards and 15 touchdowns while Kylen Granson has 22 receptions. The SMU Mustangs ground game is averaging 202.7 yards per contest, and Xavier Jones leads the way with 884 yards and 14 touchdowns. Defensively, SMU is allowing 27 points and 387.6 yards per game. Richard McBryde leads the SMU Mustangs with 53 tackles, Patrick Nelson has 10 sacks and Rodney Clemons has four interceptions.

The Memphis Tigers look for a statement victory to improve to 8-1 on the season. The Memphis Tigers have won each of their last six home games. Brady White is completing 69 percent of his passes for 2,161 yards, 10 touchdowns and four interceptions. White has 12 touchdown passes in his last four games. Damonte Coxie and Kenneth Gainwell have combined for 969 receiving yards and six touchdowns while Antonio Gibson has 13 receptions. The Memphis Tigers ground game is averaging 188.1 yards per contest, and Kenneth Gainwell leads the way with 979 yards and 11 touchdowns. Defensively, Memphis is allowing 23 points and 375 yards per game. Sanchez Blake Jr. leads the Memphis Tigers with 45 tackles, Joseph Dorceus has three sacks and Quindell Johnson has two interceptions.

The SMU Mustangs have covered four of their last five games as a road underdog. The Memphis Tigers have covered 11 of their last 14 games as a home favorite. SMU has had a handful of close games this season, but the offense has been highly productive and the defense seems to come away with big play when needed most. The Memphis Tigers have scored 42 or more points in five of their last seven games and are getting the ground game going more and more each week. Memphis has won each of the last five meetings against SMU, including a 10-point win on the road last year. At home and under the lights, I have to lean toward Memphis. Home field is likely the difference in this game.