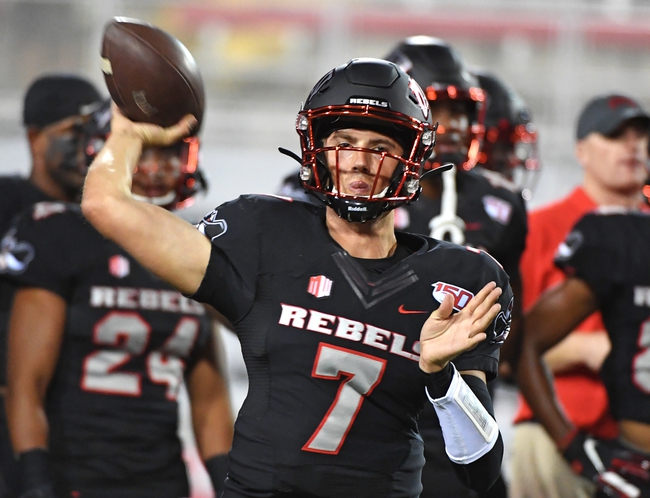 The UNLV Rebels will look to rebound from back-to-back losses after a 20-17 defeat at the hands of San Diego State in their last outing. Kenyon Oblad has thrown for 1,251 yards, 10 touchdowns and 6 interceptions on 51.9% passing while Charles Williams leads the Rebels in rushing with 793 rushing yards and 7 touchdowns. Chad Magyar has 215 rushing yards and Randal Grimes leads UNLV’s receiving group with 31 catches for 474 yards and 5 touchdowns. Noah Bean and Steve Jenkins each have 200+ receiving yards for UNLV while Darren Woods Jr. and Giovanni Fauolo Sr. each have 100+ receiving yards for UNLV this year. Defensively, Rayshad Jackson leads the Rebels with 57 total tackles while Evan Austrie is right behind with 56 total tackles including a team-high 42 solo tackles. As a team, UNLV is averaging 375.4 yards of total offense and 24.4 points per game while allowing 426.9 yards of total defense and 34.1 points per game against this season.

The Colorado State Rams will look to build on back-to-back wins after a 41-31 road win over Fresno State in their last outing. Patrick O’Brien has thrown for 1,716 yards, 8 touchdowns and 3 interceptions on 60.8% passing while Marvin Kinsey Jr. leads the Rams in rushing with 703 rushing yards along with 6 touchdowns. Warren Jackson leads the Rams in receiving with 49 catches for 719 receiving yards and 6 touchdowns while Dante Wright has 42 grabs for 615 yards and 3 TDs. Trey McBride, Nate Craig-Myers and the aforementioned Kinsey Jr. each have 200+ receiving yards this season. Defensively, Jamal Hicks leads the Rams with 72 total tackles as well as a team-high 39 solo tackles while Ellison Hubbard has a team-high 3.5 sacks this season. As a team, Colorado State is averaging 473.9 yards of total offense and 31 points per game while allowing 396.8 yards of total defense and 33.9 points per game against this season.

This feels like more points than I’d like to lay with Colorado State, but the Rebels have shown us that they aren’t able to hang around with teams that score a lot of points. UNLV hung in there with San Diego State, but the Aztecs payed down to UNLV’s level, while teams like Arkansas State, Boise State and Fresno State each hung 38+ points on the Rebels while UNLV only managed to score more than 17 points once in those three games and it still ended up being a 29-point loss. Colorado State has shown some promise lately, including a double-digit win over the same Fresno State team that hung 56 on the Rebels. I just see Colorado State being too much for UNLV to handle here so I’ll lay the points with the Rams in this one.