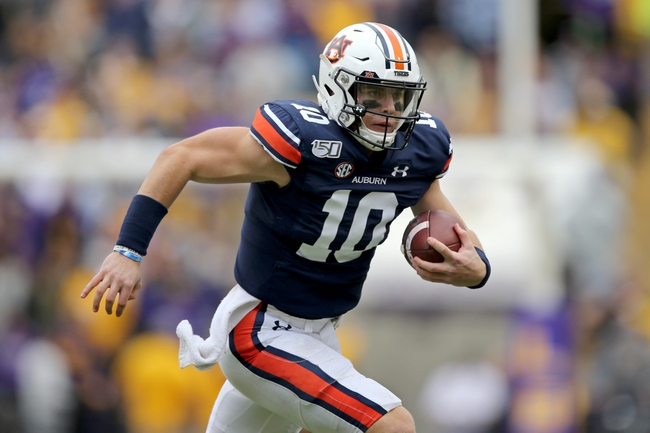 The Ole Miss Rebels and the Auburn Tigers meet in a week 10 SEC conference college football showdown from Jordan-Hare Stadium on Saturday night.

The Ole Miss Rebels will look to rebound from back-to-back defeats after a 24-17 loss to Texas A&M in their last outing. Matt Corral has thrown for 1,101 yards, 4 touchdowns and 2 interceptions on 59.9% passing while Scottie Phillips leads the Rebels in rushing with 538 rushing yardsand 6 touchdowns. John Rhys Plumlee has 456 passing yards and 508 rushing yards with 4 rushing touchdowns. Jerrion Ealy and Snoop Conner each have 300+ receiving yards this season while Elijah Moore leads Ole Miss in receiving with 621 receiving yards and 49 receptions for 4 touchdowns. Defensively, Lakia Henry leads the Rebels with 58 total tackles while Sam Williams has a team-high 4.5 sacks and Benito Jones has 3.5 sacks this season. As a team, Ole Miss is averaging 434.2 yards of total offense and 25.9 points per game while allowing 409.2 yards of total defense and 27 points per game against this season.

The Auburn Tigers will be out to bounce back after a narrow 23-20 loss to LSU in their last outing. Bo Nix has thrown for 1,458 yards, 12 touchdowns and 6 interceptions on 53.9% passing while JaTarvious Whitlow leads Auburn with 553 rushing yards and 7 rushing TDs. Kam Martin and D.J. Williams each have 200+ rushing yards while Seth Williams leads the Tigers with 29 catches for 523 yards and 8 touchdowns. Anthony Schwartz and Eli Stove each have 200+ receiving yards for the Tigers this year. Defensively, Jeremiah Dinson leads Auburn with 61 total tackles including a team-high 38 solo tackles while Marlon Davidson has a team-high 5.5 sacks this year. As a team, Auburn is averaging 415.4 yards of total offense and 34.2 points per game while allowing 342.6 yards of total defense and 17.9 points per game against this season.

This is a lot of points to lay considering that the Tigers have been in a couple of hard-fought games in the last few weeks, losing to Florida and LSU. Ole Miss has also done a decent job covering in the underdog role this year. However, while this could definitely be a look-ahead spot for Auburn with Georgia on deck, I think the Tigers will want to get out ahead early enough so that they can rest some key guys. I mean look at what happened after Auburn lost to Florida, they went out and wrecked a subpar Arkansas team on the road 51-10. Auburn finally gets to come home where they’ve won all three true home games by at least 18 points, and I think another beatdown is on the cards, so I’ll lay the points with Auburn in this one as I don’t think Ole Miss will be able to keep pace here.