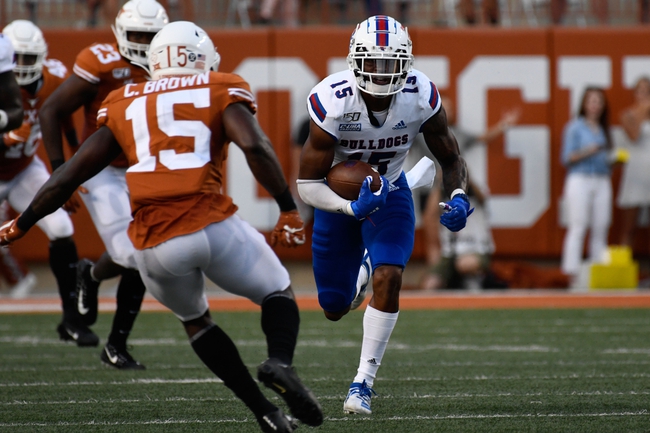 The Louisiana Tech Bulldogs and the UTEP Miners meet in a week 9 C-USA college football matchup from the Sun Bowl on Saturday night.

The Louisiana Tech Bulldogs will look to build on their current 6-game winning streak after a 45-30 win over Southern Miss last time out to improve to 6-1 this season. J’Mar Smith threw for 325 yards, a touchdown and an interception on 14 of 21 passing while Justin Henderson led the Bulldogs with 111 rushing yards and 2 touchdowns and the aforementioned Smith had a rushing TD as well. Malik Stanley led Louisiana Tech with 8 catches for 212 yards and a touchdown while Griffin Hebert had 86 receiving yards. Defensively, Willie Baker led the Bulldogs with 10 total tackles including a team-high 5 solo tackles while Ka’Derrion Mason had a pair of sacks and Amik Robertson had 3 interceptions while Ezekiel Barnett had a pick-six late in the 4th. As a team, Louisiana Tech is averaging 468.6 yards of total offense and 35.6 points per game while allowing 408.7 yards of total defense and 24 points per game against this season.

The UTEP Miners will look to snap their current five game losing streak after a 32-17 loss to FIU last time out. Kai Locksley threw for 117 yards and a touchdown on 7 of 12 passing while Brandon Jones threw for 34 yards and a pick on 5 of 9 passing. Locksley also led the Miners with 66 rushing yards while Treyvon Hughes had 48 rushing yards and a touchdown. Jacob Cowing led the Miners in receiving with 47 receiving yards and a touchdown while Tre’Shon Wolf had a team-high 4 grabs for 44 yards. Defensively, Josh Caldwell led UTEP with 7 total tackles including a team-high 5 solo tackles. As a team, UTEP is averaging 301.2 yards of total offense and 17.7 points per game while allowing 408.3 yards of total defense and 33 points per game against this season.

Laying this many points on the road isn’t something that I’m usually willing to stomach, but I just don’t think that UTEP has the offense to figure out how to score enough points to keep this one within the number. Louisiana Tech has scored 35 points in four of their last five games, covering in each of those four games so I’ll lay the hefty number with the Bulldogs in this one.