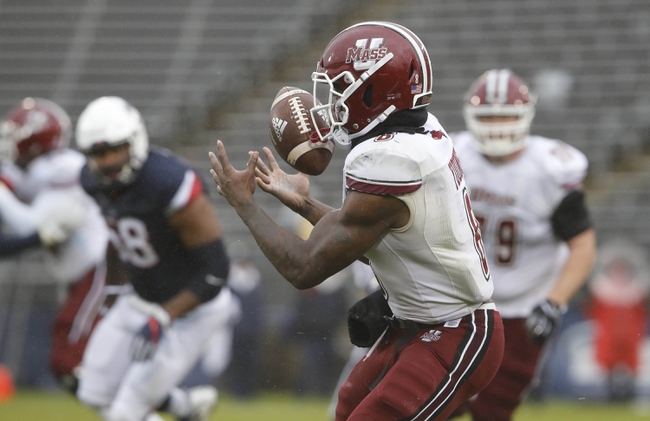 The UConn Huskies and the UMass Minutemen meet in a week 9 college football matchup from Warren P. McGuirk Alumni Stadium on Saturday afternoon.

The UConn Huskies will be looking to bounce back from their current 6-game losing streak after falling to Houston in their last outing by a final score of 24-17. Jack Zergiotis threw for 270 yards, 2 touchdowns and an interception on 27 of 44 passing while Kevin Mensah led UConn in rushing with 93 rushing yards. Cameron Ross led UConn in receiving with 9 grabs for 75 yards while Art Thompkins had 7 grabs for 54 yards and a touchdown and Matt Drayton had a receiving score of his own. Defensively, Omar Fortt led the Huskies with 11 total tackles including a team-high 6 solo tackles. As a team, UConn is averaging 316.1 yards of total offense and 16.7 points per game while allowing 429.3 yards of total defense and 38.1 points per game against this season.

The UMass Minutemen come into this one rested after their bye week, having a week to lick their wounds after a 69-21 pasting at the hands of Louisiana Tech in their last outing to fall to 1-6 this season. Randal West leads the Minutemen with 534 passing yards, 4 touchdowns and 3 interceptions on 60.2% passing while Bilal Ally has rushed for a team-high 469 rushing yards and 4 touchdowns. Zak Simon leads UMass in receiving with 26 yards with 18 grabs while Samuel Emilus has 18 grabs of his own for 201 yards. Jermaine Johnson Jr. leads the Minutemen with 24 catches for 160 yards while Brennon Dingle, Jessie Britt and SadiqPalmer each have 102 receiving yards this season. Defensively, Cole McCubrey leads UMass with 53 total tackles including a team-high 29 solo tackles while Isaiah Rodgers has 3 interceptions. As a team, UMass is averaging 301.6 yards of total offense and 20.6 points per game while allowing 551.6 yards of total defense and 49.9 points per game against this season.

I’m honestly not sure which way to lean in this dumpster fire of a football game. No seriously this might be the worst game of the week. UConn hasn’t broken 23 points against any FBS opposition this year while UMass has been getting spanked left and right scoring more than 28 points once in a win against winless Akron. I’m not backing a side in this one, instead I’m going to side with the under. You have two teams who have trouble scoring and the only times that their games go over is when the other team does all of the scoring. I wouldn’t be surprised if the score combined stayed under 40, but this line is giving up way too much on the total.