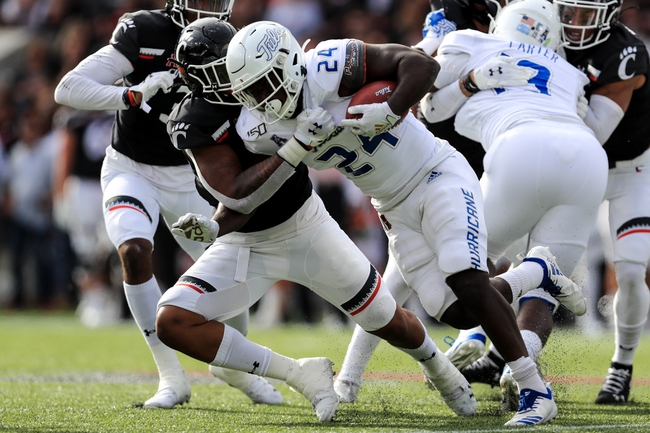 The Memphis Tigers and the Tulsa Golden Hurricane meet in a week 9 AAC college football matchup from Skelly Field at H.A. Chapman Stadium on Saturday night.

The Memphis Tigers will look to build some momentum after improving to 6-1 with a 47-17 beatdown of Tulane in their last outing. Brady White threw for 358 yards and 5 touchdowns on 21 of 29 passing while Kenneth Gainwell led the Tigers in rushing with 104 rushing yards and a touchdown. Gainwell also led the Tigers in receiving with 9 catches for 203 yards and 2 touchdowns while Calvin Austin had 57 receiving yards and a pair of touchdowns and Joey Magnifico had a touchdown as well. Defensively, Xavier Cullens led Memphis with 8 total tackles including 7 solo tackles while Thomas Pickens, Austin Hall and Quindell Johnson each had an interception. As a team, Memphis is averaging 466.7 yards of total offense and 39.1 points per game while allowing 345.1 yards of total defense and 20.4 points per game against this season.

The Tulsa Golden Hurricane could use a win to snap a three game losing skid following a 24-13 loss to Cincinnati in their last outing. Zach Smith threw for 243 yards and 2 interceptions on 21 of 43 passing while Shamari Brooks led Tulsa on the ground with 68 rushing yards. Corey Taylor II had 56 rushing yards while T.K. Wilkerson added a rushing touchdown. Keylon Stokes led Tulsa with 8 catches for 99 yards while Josh Johnson had 5 grabs for 58 yards and Sam Crawford and Keenen Johnson each had 4 receptions this season. Defensively, Zaven Collins and Cooper Edmiston led the Golden Hurricane with 9 total tackles while Thomas Bennett and Shemarr Robinson each had a fumble recovery. As a team, Tulsa is averaging 378.9 yards of total offense and 21.9 points per game while allowing 384.9 yards of total defense and 31 points per game against this season.

This line has had me go back and forth as Memphis could be in danger of looking ahead with a date with SMU on tap the following week that’s basically for the West title in the AAC as well as the fact that Tulsa has hung with some stiff competition, covering against SMU, Cincinnati and Michigan State. However, Memphis is heads and shoulders the better team here, and if you’re like me and you occasionally like trends to help substantiate your pick, the last five meetings have each been decided by at least 20 points. The over could b worth a look as well as three of the last five games have gone over 60 points, but I think that laying the points with Memphis makes sense here.