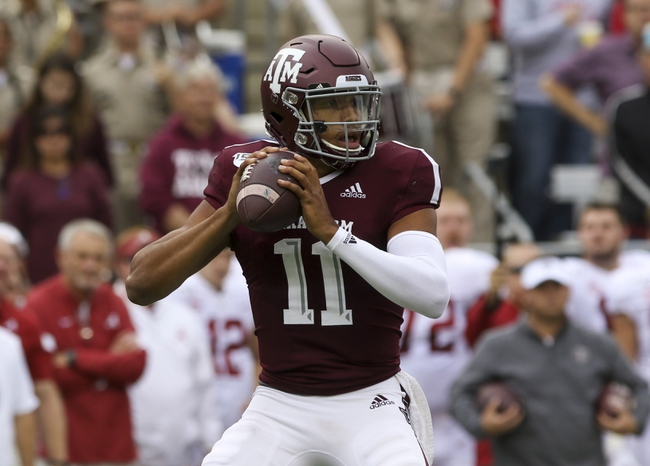 The Mississippi State Bulldogs will look for a win to get back to .500 after a 36-13 beatdown loss to LSU last time out. Garrett Shrader threw for 238 yards, a touchdown and 2 interceptions on 17 of 28 passing while also leading the Aggies in rushing with 66 rushing yards and a touchdown. Kylin Hill had 34 rushing yards while Stephen Guidry led A&M with 6 catches for 98 yards and a touchdown. Defensively, Jaquarius Landrews led the Bulldogs with 8 total tackles while Chauncey Rivers had 1.5 sacks. As a team, Mississippi State is averaging 371 yards of total offense and 24.9 points per game while allowing 397 yards of total defense and 28.4 points per game against this season.

The Texas A&M Aggies will look to find some consistency after alternating wins and losses in each of their seven games so far this year after a 24-17 win over Ole Miss last time out. Kellen Mond threw for 172 yards, a touchdown and 2 interceptions on 16 of 28 passing while also rushing for 76 yards. Isaiah Spiller led the Aggies with 78 rushing yards and a touchdown while Jalen Wydermyer had 4 catches for 67 yards and Jhamon Ausbon had a team-high 5 catches for 47 yards. Kendrick Rogers also added a touchdown grab for the Aggies in the win. Defensively, Buddy Johnson led the Aggies with 10 total tackles including a team-high 5 solo tackles as well as a fumble recovery for a touchdown in the 3rd quarter. As a team, Texas A&M is averaging 408.7 yards of total offense and 30.9 points per game while allowing 336.4 yards of total defense and 21.9 points per game against this season.

The points are definitely worth a look as the Bulldogs have won the last three and four of the last five meetings against the Aggies, including three wins by at least 15 points. However, I’m not a fan of what the Bulldogs are putting on the field as I’m just not a Garrett Shrader guy. Texas A&M is the better team offensively and since Texas A&M joined the SEC in 2012, six of the seven meetings have been decided by double digits so I’ll lay the points with Texas A&M in this one.