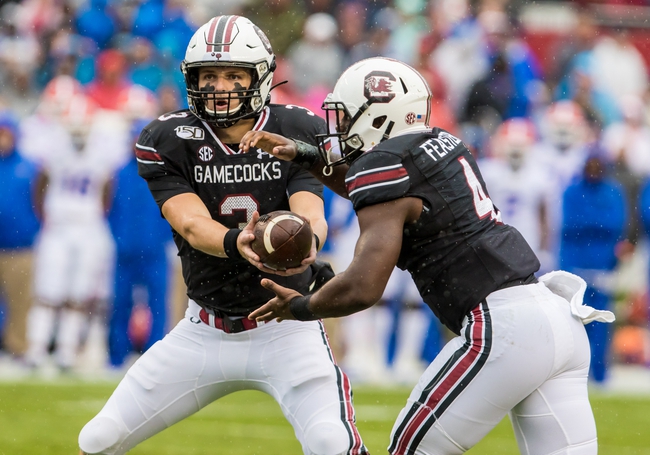 The South Carolina Gamecocks and the Tennessee Volunteers meet in a week 9 SEC conference college football tilt from Neyland Stadium on Saturday afternoon.

The South Carolina Gamecocks will look to bounce back after suffering a 38-27 loss to Florida in their last outing. Ryan Hilinski threw for 170 yards and a touchdown on 17 of 35 passing while Tavien Feaster rushed for a team-high 175 rushing yards and Mon Denson had 58 rushing yards with each back logging a touchdown. Bryan Edwards led the Gamecocks with 7 catches for 78 yards while OrTre Smith had a touchdown grab for the Gamecocks. Defensively, J.T. Ibe led the Gamecocks with 8 total tackles including 6 solo tackles while Jammie Robinson had an interception. As a team, South Carolina is averaging 406.6 yards of total offense and 28.6 points per game while allowing 396.7 yards of total defense and 25.3 points per game against this season.

The Tennessee Volunteers will also look to rebound from a 35-13 loss to Alabama in their last outing to fall to 2-5 on the year. Brian Maurer threw for 62 yards and an interception on 5 of 7 passing while Jarrett Guarantano threw for 55 yards on 7 of 16 passing. Tim Jordan led the Vols with 94 rushing yards while the aforementioned Maurer had a rushing TD as well. Jauan Jennings led the Volunteers with 6 catches for 66 yards as well in the win. Nigel Warrior led the Tennessee defense with 6 total tackles including 4 solo tackles as well as an interception. As a team, Tennessee is averaging 336.3 yards of total offense and 21.6 points per game while allowing 360.7 yards of total defense and 27 points per game against this season.

The Vols as a home dog would’ve been worth a look had their quarterback situation heading into this game not looked so murky. Either way, South Carolina looked extremely capable against Florida and should be able to defeat Tennessee by at least a touchdown as the Gamecocks are just the better team here. Lay the points with South Carolina as I just think Tennessee is a lost cause this season.