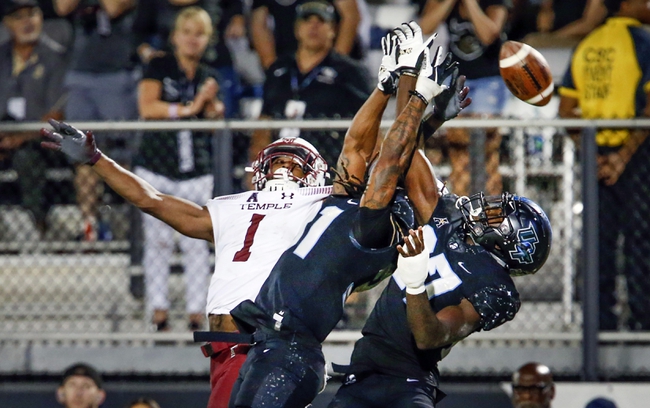 The UCF Knights look for a nice road win after splitting their last four games. The UCF Knights have won five of their last seven road games. Dillon Gabriel is completing 60.2 percent of his passes for 2,000 yards, 17 touchdowns and five interceptions. Gabriel has five touchdown passes and three interceptions in his last three games. Gabriel Davis and Tre Nixon have combined for 1,302 receiving yards and 14 touchdowns while Marlon Williams has 16 receptions. The UCF Knights ground game is averaging 212.2 yards per contest, and Greg McCrae leads the way with 401 yards and six touchdowns. Defensively, UCF is allowing 21.7 points and 349.7 yards per game. Nate Evans leads the UCF Knights with 56 tackles, Brendon Hayes has 3.5 sacks and Tay Gowan has two interceptions.

The Temple Owls look for a victory to become bowl eligible for a fifth straight season. The Temple Owls have won each of their last eight home games. Anthony Russo is completing 58.8 percent of his passes for 1,674 yards, 14 touchdowns and six interceptions. Russo has seven touchdown passes and four interceptions in his last five games. Jaden Blue and Branden Mack have combined for 1,054 receiving yards and six touchdowns while Isaiah Wright has 40 receptions. The Temple Owls ground game is averaging 151.8 yards per contest, and Re'Mahn Davis leads the way with 629 yards and five touchdowns. Defensively, Temple is allowing 22.7 points and 372.7 yards per game. Shaun Bradley leads the Temple Owls with 47 tackles, Ifeanyi Maijeh has six sacks and Harrison Hand has three interceptions.

The UCF Knights are 8-4-1 ATS in their last 13 games as a road favorite. The Temple Owls have covered 13 of their last 16 games as a home underdog. UCF has been shaky at best on the road this season and hasn't exactly been the same dominating team it was earlier in the year since that upset loss to Pittsburgh. The Temple Owls are a team we've made a ton of money on over the years, as they never get respect from oddsmakers but do nothing but cover numbers in the underdog role, especially at home. It's the point I back Temple whenever its getting points. That doesn't change here.