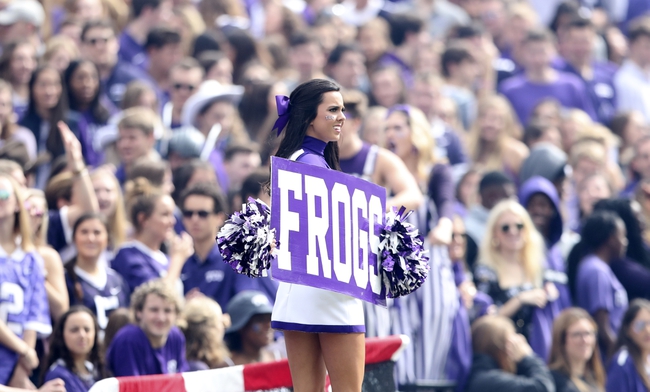 The Texas Longhorns and the TCU Horned Frogs will meet up on the college football gridiron Saturday.

Texas sits at 5-2 this year. The Longhorns’ losses have come to LSU and Oklahoma, and they’ve beaten LA Tech, Rice, OK State, WVU and Kansas so far.

In the win over Kansas, Texas QB Sam Ehlinger had 399 yards with four TDs and an INT, and Keaontay Ingram added 101 rush yards and a score. Devin Duvernay posted 110 yards and two scores on eight grabs as well.

Over on the TCU side, they’re 3-3 so far. The Frogs’ wins have come versus AR-Pine Bluff, Purdue and Kansas while they’ve lost to SMU, Iowa State and Kansas State.

In the loss to Kansas State, TCU quarterback Max Duggan passed for 132 yards, with most going to Jalen Reagor on 85 yards from eight catches. Duggan also led the rush with 115 yards and a score.

Texas seems to step up their proverbial game when they’re playing a tough opponent. Cases in point: 45-38 against LSU and 34-27 against Oklahoma. The Longhorns escaped a not-so-good Kansas Team 50-48 which is a bit of a concern, however.

TCU can put up the points as well, but they managed just 17 against Kansas State. I’m not so sure the Frogs will be able to keep up so I’m just going to stick with Texas here.