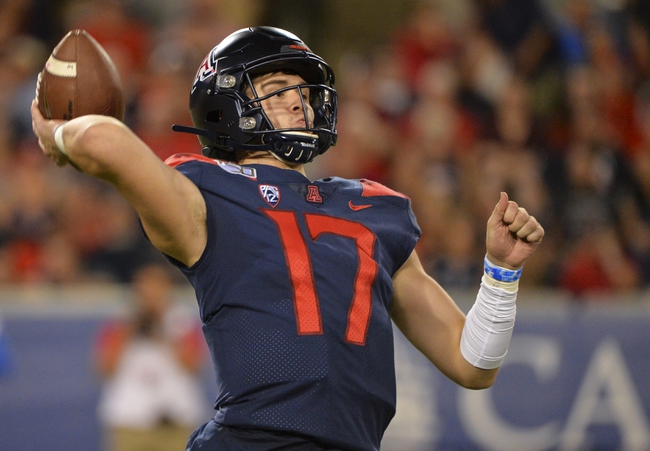 The Arizona Wildcats and the Stanford Cardinal meet in a week 9 Pac-12 conference college football matchup from Stanford Stadium on Saturday.

The Arizona Wildcats will look to rebound after a 41-14 beatdown at the hands of USC last time out to fall to 4-3 on the year. Grant Gunnell threw for 196 yards, 2 touchdowns and an interception on 16 of 26 passing while Khalil Tate threw for 47 yards on 6 of 10 passing. J.J. Taylor led the Wildcats in rushing with 80 rushing yards while Nathan Tilford had 61 rushing yards. Brian Casteel led the Arizona receiving corps with 4 catches for 101 yards and both Arizona touchdowns. Tony Fields II led the Wildcats with 10 total tackles while Colin Schooler had 9 total tackles with a team-high 6 solo tackles and a fumble recovery. As a team, Arizona is averaging 491.6 yards of total offense and 32.4 points per game while allowing 470.1 yards of total defense and 34.1 points per game against this season.

The Stanford Cardinal will look for a win to get back to .500 after a 34-16 loss to UCLA in their last outing. Jack West threw for 143 yards on 15 of 32 passing while Cameron Scarlett led the Cardinal with 34 rushing yards and a touchdown. Connor Wedington led Stanford with 48 receiving yards on 3 receptions while Simi Fehoko had 35 receiving yards and Colby Parkinson had a team-high 4 grabs for 26 yards. Defensively, Curtis Robinson and Thomas ooked each had a team-high 9 total tackles while Paulson Adebo had an interception. As a team, Stanford is averaging 330.9 yards of total offense and 20 points per game while allowing 402.4 yards of total defense and 27.6 points per game against this season.

I’m not sure how much of a fan I am when it comes to laying points with Arizona on the road as they’ve lost two of their three road games and with a line around a field goal, you’re almost saying Stanford wins outright if you take the points. However, Stanford just got shellacked by a bad UCLA team at home, and the constant question marks at the quarterback position make it hard to justify taking the Cardinal at all here. I may change this pick once Stanford clarifies the quarterback position, but for right now I’ll take the free points with Arizona on the road here.