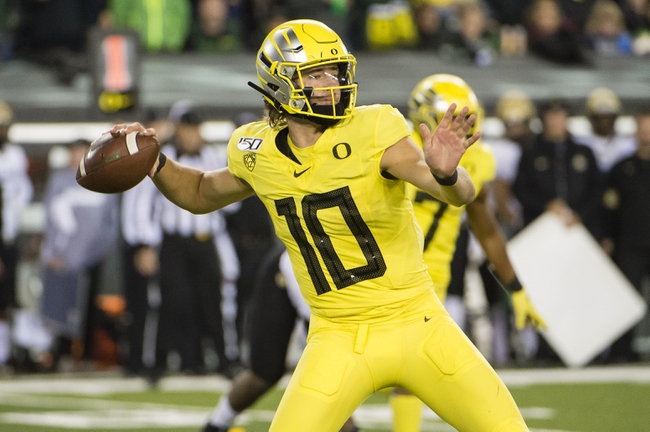 The Washington State Cougars and the Oregon Ducks meet in a week 9 Pac-12 college football matchup from Autzen Stadium on Saturday night.

The Washington State Cougars will look to build on a 41-10 win over the Colorado Buffaloes in their last outing. Anthony Gordon threw for 369 yards, 4 touchdowns and an interception on 35 of 51 passing while Max Borghi led the Cougars on the ground with 105 rushing yards and a touchdown. Brandon Arconado had 5 receptions for a team-high 109 yards and a touchdown while Easop Winston Jr. had 82 yards and Borghi, Dezmon Patmon and Davontavean Martin each had a receiving touchdown as well for the Cougs in the win. Jahad Woods led the Cougars on defense with 8 total tackles as well as a sack while Marcus Strong, Skyler Thomas and George Hicks III each had an interception. As a team, Washington State is averaging 532.7 yards of total offense, the 4th-most in the country, as well as the most passing yards per game with 440.7 passing yards per game as well as 42.7 points per game while allowing 439.1 yards of total defense and 28.7 points per game against this season.

The Oregon Ducks will look to build on their current six game winning streak after a crucial 35-31 road win over Washington in their last outing. Justin Herbert threw for 280 yards and 4 touchdowns on 24 of 38 passing while Cyrus Habibi-Likio had a team-high 81 rushing yards and a touchdown. Travis Dye had 51 rushing yards and CJ Verdell added 48 rushing yards of his own. Johnny Johnson III had a team-high 5 catches for 90 yards while Mycah Pittman had 48 receiving yards and a touchdown and Jaylon Redd had 5 grabs for 36 yards and 2 TDs. Spencer Webb also added a touchdown for the Ducks in the victory. Defensively, Thomas Graham Jr. and Isaac Slade-Matautia each had 7 total tackles with Graham Jr logging 7 solo tackles. As a team, Oregon is averaging 462 yards of total offense and 35.9 points per game while allowing 291.3 yards of total defense and 11.9 points per game against this season.

Oregon has been lights out defensively for most of the season and the Ducks can score so being a decent-sized favorite at home makes sense. However, while it makes sense, I just don’t know if I agree here. The Ducks just went to war with Washington in a pivotal game in regards to the Pac-12 championship race and that kind of game takes its toll even with a week to rest up and prepare, leaving the Ducks in prime letdown mode here. Washington State got beat up against Utah a few weeks ago, but this is still a Cougars team that’s the best in the country in terms of airing out the football and putting points on the board. I just think leaving this many points on the table is dangerous with Washington State, so I’ll take a shot at the Cougars and the points in this one.