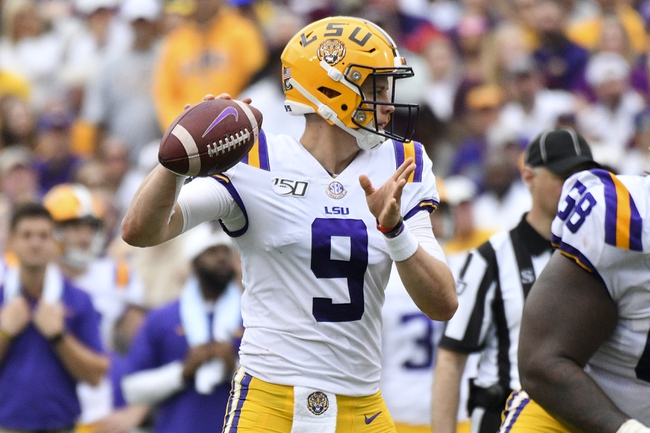 The Auburn Tigers and the LSU Tigers meet in a pivotal week 9 SEC conference college football tilt from Tiger Stadium on Saturday afternoon.

The Auburn Tigers will look for a big road win to build on their 51-10 beatdown of Arkansas in their last outing. Bo Nix threw for 176 yards and 3 touchdowns on 12 of 17 passing while Joey Gatewood threw for a 17 yard touchdown as well. Kam Martin led the Tigers in rushing with 84 rushing yards while Harold Joiner had 59 rushing yards and a touchdown. Shaun Shivers and Bo Nix each had a rushing touchdown as well in the victory. Seth Williams led the Tigers with 90 receiving yards and 2 touchdowns while Anthony Schwartz had a team-high 6 receptions for 73 yards and a touchdown and Jay Jay Wilson also had a touchdown grab. Marlon Davidson was one of five Tigers with 5 tackles as well as a pair of sacks and a fumble recovery. Chandler Wooten and Javaris Davis each had an interception as well in the victory for Auburn. As a team, Auburn is averaging 433.7 yards of total offense and 36.3 points per game while allowing 319 yards of total defense and 17.1 points per game against this season.

The LSU Tigers will look to maintain their perfect record after improving to 7-0 with a 36-13 win over Mississippi State in their last outing. Joe Burrow threw for 327 yards and 4 touchdowns on 25 of 32 passing while Clyde Edwards-Helaire led the Tigers in rushing with 53 rushing yards and Tyrion Davis-Price added 49 rushing yards. Justin Jefferson led LSU with 8 catches for 89 yards and a touchdown while Racey McMath had 76 receiving yards and a TD. Ja’Marr Chase and Thaddeus Moss each had 48 receiving yards with Chase adding 5 receptions with a touchdown while Derrick Dillon added a receiving score as well for LSU. Grant Delpit led LSU with 11 tackles including 5 solo tackles while JaCoby Stevens and Kristian Fulton each had an interception. As a team, LSU is averaging 540 yards of total offense as well as the 2nd-highest scoring offense in the country averaging 50.1 points per game while allowing 320.7 yards of total defense and 20 points per game against this season.

This LSU team is being talked about as one of the best in the program’s recent history given their offensive firepower and willingness to get the job done on defense as LSU has hung at least 42 on every opponent they’ve faced allowed 14 points or less in four of their seven games this season. However, Auburn is no slouch, and while Bo Nix is relatively green, he’s still a talented QB behind him with one of the best pass rushes in all of college football on the other side. I just get the feeling that this game ends up being the heavyweight fight that it’s billed to be and we get a knock down and drag out style of game here where the game is decided in the last couple of possessions. I’ll take a shot with Auburn and the points in this game.