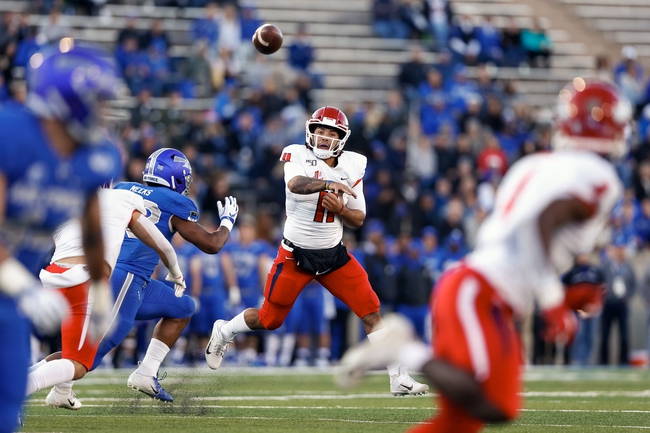 Where to Watch: ESPU Stream live sports and exclusive originals on ESPN+. Sign up now!

The Colorado State Rams come into this one rested after their bye week, improving to 2-5 on the year with a 35-21 road win over New Mexico in their last outing. Patrick O’Brien has thrown for 1,394 yards, 6 touchdowns and 2 interceptions while Marvin Kinsey Jr. has rushed for 703 yards and 6 touchdowns. Dante Wright has rushed for 180 yards and 2 touchdowns while Marcus McElroy has 123 rushing yards. Wright also leads the Rams in receiving with 37 catches for 592 yards and 3 touchdowns while Warren Jackson has a team-high 40 receptions and 5 touchdowns with 541 yards. Nate Craig-Myers, Kinsey Jr. and Trey McBride each have 200+ receiving yards for the Rams this season. Defensively, Jamal Hicks leads Colorado State with 62 total tackles including a team-high 34 solo tackles while Jan-Philip Bombek has 5 sacks to lead the Rams and Ellison Hubbard is 2nd with 3.5 sacks. As a team, Colorado State is 470.1 yards of total offense and 29.6 points per game while allowing 398 yards of total defense and 34.3 points per game against this season.

The Fresno State Bulldogs will look to build on wins in three of their last four game while trying to get back to .500 after a 56-27 beatdown of UNLV in their last outing. Jorge Reyna threw for 229 yards and a touchdown on 16 of 23 passing while Jalen Cropper led the Bulldogs on the ground with 91 rushing yards. Ronnie Rivers had 51 rushing yards with 2 touchdowns while the aforementioned Reyna had 47 rushing yards and a TD and Josh Hokit rushed for 33 yards and 3 touchdowns. Keric Wheatfall led the Bulldogs with 4 grabs for 86 yards while Derrion Grim had 60 receiving yards and Zane Pope had 4 catches with Jared Rice logging a touchdown reception as well. Defensively, Justin Rice led Fresno State with 10 tackles including 8 solo tackles while Mykal Walker had 9 solo tackles and the trio of Juju Hughes, Arron Mosby and Levelle Bailey each had an interception in the victory. As a team, Fresno State is averaging 403.5 yards of total offense and 33.7 points per game while allowing 370.3 yards of total defense and 29.3 points per game against this season.

Fresno State should rightfully be favored here, especially after kicking the crap out of UNLV in their last outing. However, while Colorado State’s wins are against an FCS team in Western Illinois and a New Mexico team that’s still winless in conference, the Rams know how to put points on the board win or lose. The Bulldogs still gave up 27 points in their win against UNLV and I think Colorado state is a better team than UNLV offensively. I just think this is a case of giving too many points to a team that can keep up on the scoreboard, so I’ll take Colorado state and the points here.